Relatives of murder victims spoke out to support efforts to repeal death penalty. But a local DA said the death penalty has its uses. 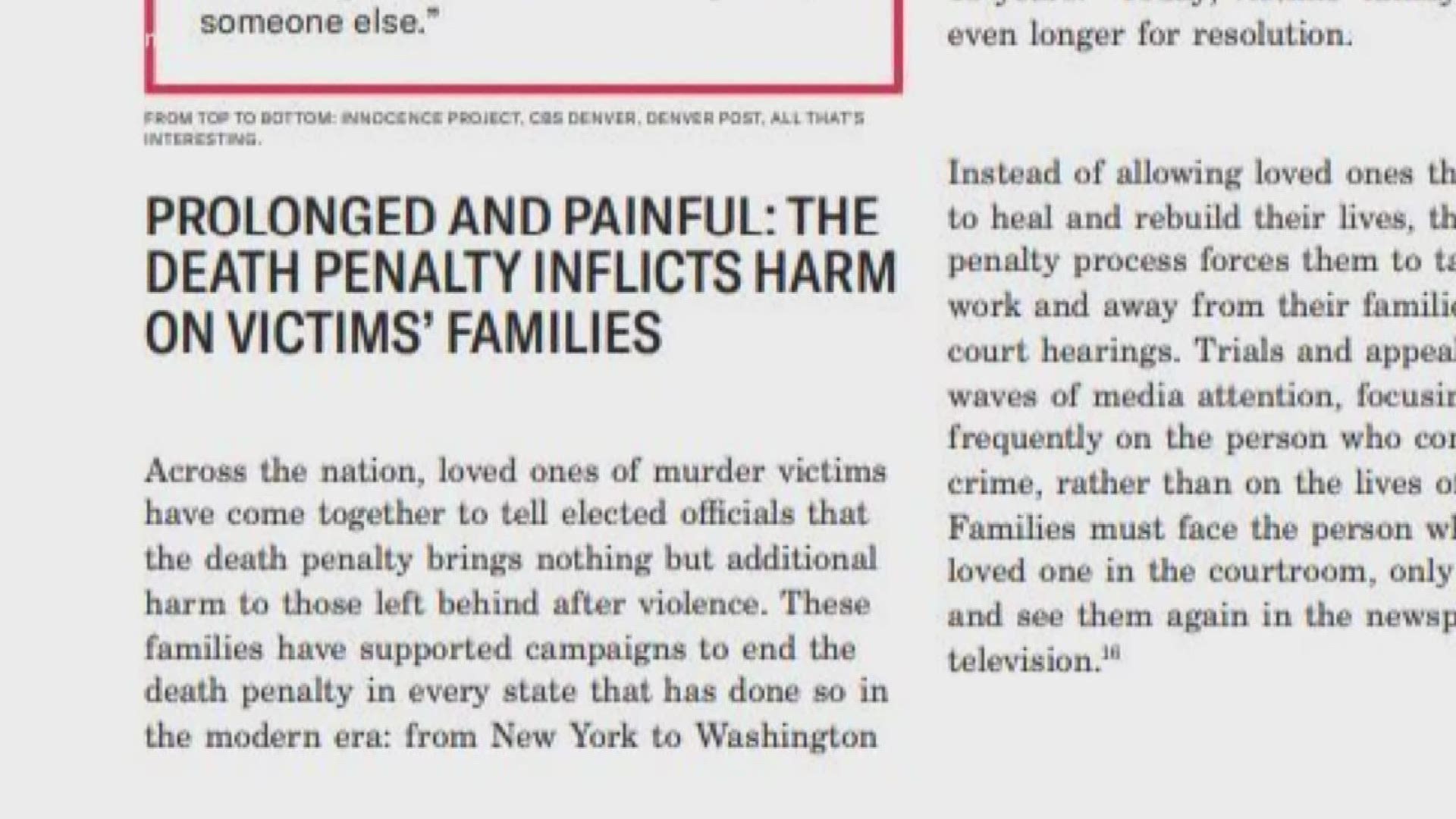 DENVER — Four women sit together in a room at ACLU Colorado sharing a bond with each other they wish they never had.

"My brother was a Denver Police officer who was murdered 22 years ago," said Gail Rice, Bruce VanderJagt's sister.

"Hello, my name is Alice Randolph and I'm here today representing my son, Loren Collins who was murdered on Quincy and Buckley in Aurora," Randolph said.

"My name is Arlis Keller and one of my brothers Dwight Tobyne was murdered 10 years ago just before this past Thanksgiving," Keller said.

"My name is Linda Burks-Brown and my brother Willie Frazier was murdered in 2005," Burks-Brown said.

They are all survivors who came out to support the report released by the Colorado chapter of the American Civil Liberties Union titled, "Ending a Broken System: Colorado's Expensive, Ineffective, and Unjust Death Penalty."

"My greatest motivation I think is the violation of my Christian faith," Rice said.

Keller said she believes the death penalty does not provide solace.

"It does not help people come to terms with the murder," Keller said.

Randolph said the death penalty and its appeals process are difficult for the victim's family.

"When you're looking at an appeal that's coming up, you do have to relive it," Randolph said.

Trauma to the victims' families are a thread through the ACLU report.

"I think that's only a handful of victims," Brauchler said. "That doesn't take into consideration all the other victims who want to see death for the cold-blooded murderer of their loved one."

"When you set the bar artificially low at life without parole, you take away the justice aspect for the worst of the worst offenders," Brauchler said.

Rice said there is no justice in the death penalty, either.

"There is no way in which the death penalty is any way restorative," Rice said.

The ACLU report argues that the death penalty is costly for taxpayers and does not act as an effective deterrent for criminals. Burks-Brown said life in prison is actually more effective.

"That is the worst type of punishment that anyone can have because your life is not yours any longer," Burks-Brown said.

Brauchler said the death penalty does have an impact, which actually saves some victims' families from enduring a trial at all.

Legislators who plan to offer a bill to repeal the death penalty said they feel good about it passing this year based on the current makeup of the State Senate.

Brauchler said he agrees that it will likely pass this year, but said this is an issue that should be placed on the ballot to be decided by voters.