Democratic presidential candidate Tulsi Gabbard sat down with Next with Kyle Clark after a campaign event in Boulder, just under two weeks ahead of Super Tuesday. 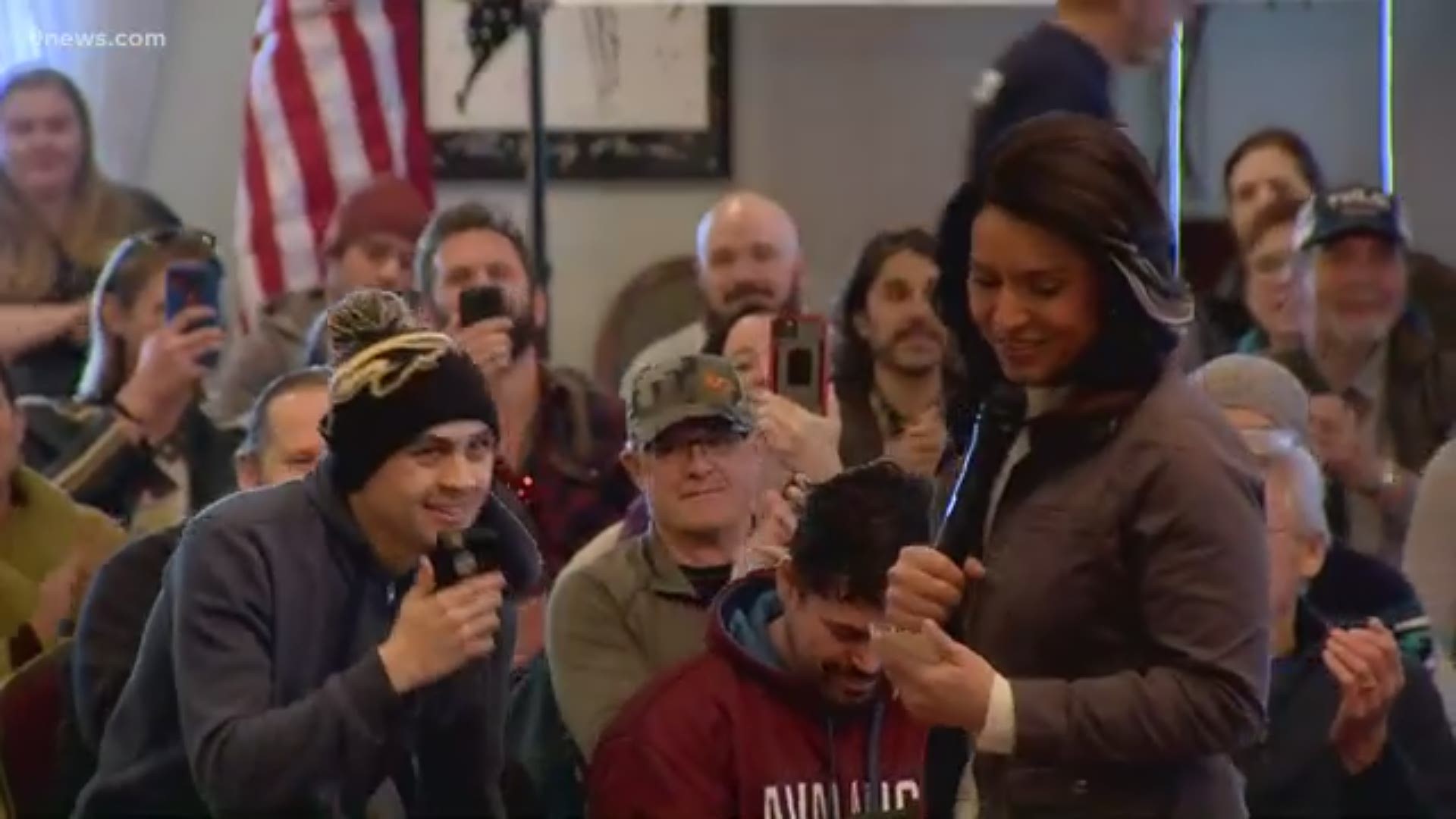 BOULDER, Colo. — Hawaii Congresswoman Tulsi Gabbard was not in Las Vegas for the Democratic presidential primary debate this week. She was instead in Colorado, holding campaign events on both Wednesday and Thursday.

Gabbard did not have enough support in the polls to qualify for the debate. She told the crowd at the Avalon Room in Boulder that her campaign has struggled because of what she described as a media blackout.

“We’ve experienced and are experiencing a mass, kind of, corporate media blackout,” she said to supporters. “They’re making these decisions using their multi-billion dollar corporations to say, ‘We don’t want you to hear from the first female combat veteran ever to run for president, who is challenging the military-industrial complex, challenging the foreign policy establishment, and pointing out the truth that we need to end these wasteful regime change wars, we need to end this new cold war and arms race, and redirect our tax dollars toward serving the needs of our people and our communities who are in desperate need here at home.’”

In a sit-down interview with Next with Kyle Clark, Gabbard, an Iraq War veteran, elaborated on that idea, explaining why she would want to scale back the country’s interventionist approach. Here are some of the interview highlights.

On how the U.S. Military should be utilized:

“No longer being the police of the world, but instead focusing on the use of diplomacy, being able to work out the differences we have with other countries, while also sharing the opportunity in this space to work together on areas of shared interests,” she said. “Things like the coronavirus crisis that we’re seeing now affecting so many people around the world. We have to be able to work with China and other countries to be able to prevent an epidemic from occurring. Our military should be focused on those that pose a threat to our country.”

Earlier this year, Gabbard decided to sue a former Democratic presidential candidate, Hillary Clinton, for a comment that suggested Gabbard is an asset to Russia. On the implication, and whether her foreign policy stance could be a Russian asset:

This is something that attempts to devalue who I am as a person and what I have dedicated my life to, just as it devalues the service that every one of our service members has taken. My foreign policy is focused around what serves the best interest of the American people and our nation’s national security. And how we as the United States can actually be the force for good in the world that represents our values.

Bernie Sanders' poll numbers are climbing as she struggles to move out of single digits. Gabbard supported him in 2016. On whether she would join his movement in 2020:

Bernie’s a friend of mine. We’ve been able to spend a lot of time together. I agree with him on some issues, disagree with him on others. The reason why I decided to run for president still stands... I think the American people are looking for a  new generation of leadership, of fresh perspective and approach to solving problems, combined with that experience to be able to execute those plans, to be able to deliver results for them and to give them the peace of mind that they have a commander in chief of our armed forces who actually knows what they’re doing. I bring experience in both of those areas.

You can see the full interview here: