While they never met Ryan Blume in person, the community of Colorado Rockies fans on Twitter just lost a friend. 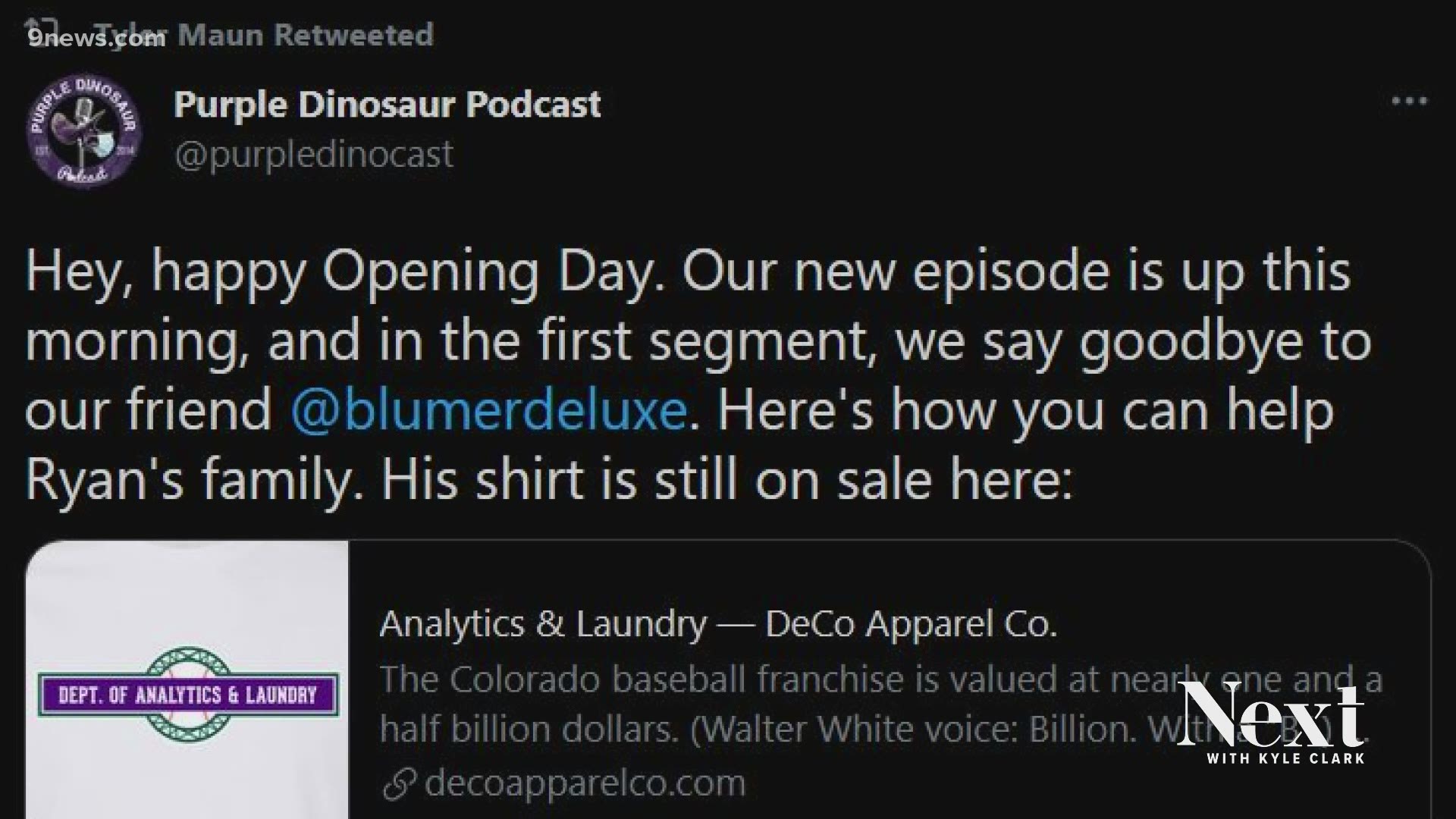 DENVER — Negative, depressing and toxic are all words we use to describe social media. But places like Twitter can be hopeful, inspiring and healing, too.

There is a corner of the Twitterverse like that, carved away for fans of the Colorado Rockies.

Last week, they lost a pillar of that online community, Ryan Blume.

“I think it says the most about someone like him that so few of us actually met him in person and interacted with him, and we're still so crushed over losing him,” Tyler Maun said.

Maun is a leader of Rockies Twitter in his own right. He started the Purple Dinosaur podcast seven years ago, and an online family grew up around it.

Blume was a big part of that family for five years.

“He was just so smart and so funny, and he was a combination of all the things we love about it,” Maun said.

Memes and sharp jokes were tools Blume used online to blunt the pain that comes with a quarter-century of mostly mediocre baseball.

The final 280-character conversation Maun and Blume had started with a graphic Blume designed poking fun at revelations in The Athletic.

A recent article said the Rockies made their analytics team wash players’ laundry. Blume created a fake sign that read “DEPT. OF ANALYTICS & LAUNDRY," and another Rockies Twitter family member said Maun should turn it into a t-shirt.

“Ryan responded to that tweet and said, ‘you can absolutely have this design in exchange for one extra-large,'" Maun said.

We're so close to 150 of Ryan's design sold. If you haven't yet ordered yours, still taking orders. All proceeds benefit the family of @blumerdeluxe, who unexpectedly passed away last week. Other contribution options in the thread, too. https://t.co/OdbHy5YRvB

Maun got the design mocked up, and sent it back to Blume expecting a quick reply.

The silence was deafening.

“Somebody who was so full of life in every way that you could convey across the weird chasm of social media, and then all the sudden to just see that silence was just so shocking,” Maun said.

The plan was just to sell a handful of shirts to people who got the joke. Now, Blume’s final gift to Rockies Twitter is paying it forward to support the loved ones he left behind.

“Everything we make for this shirt is going to go to Ryan's family," Maun said. “We're less than a week removed and we're closing in on $3,000.”

Their interactions were only 280 characters at a time, but the impact of those words is easy to see.

Blume’s church is also raising money and collecting meals for his family. If you’d like to help, click here.