Your signs from the 2017 Martin Luther King Jr. 'Marade' in Denver

Officials spoke out at the podium at the start of the day, but attendees spoke out themselves, without saying a word. 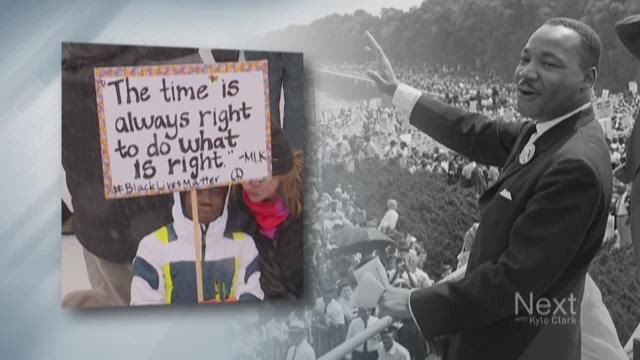 Colorado turned out for the Martin Luther King Jr. "Marade" in Downtown Denver on Monday, despite the snow and cold.

Officials spoke out at the podium at the start of the day, but attendees spoke out themselves, without saying a word.

A photo posted by Adrian Miller (@soulfoodscholar) on

Instead of quoting Dr. Martin Luther King Jr.'s beautiful words today as I have every year, I want to use this space to recommit myself to the active resistance modeled by MLK, by John Lewis, by Rosa Parks, by Dr. Cornel West, by Dr. Vincent Harding. The current state of our government is not only deeply disturbing, but also has horrific and deadly implications for millions of people. I want to call our elected officials, even if I'm tired from work or from staying up until 2am writing a paper. I want to join national marches and protests, even if I'm exhausted from taking care of a family member 24 hours prior. I want to engage white friends and family members in important yet difficult conversations, even if I'm physically shaking from fear of possible conflict or confrontation. Because life will always get in the way if I let it and words are meaningless without action. • If you're looking for a way to begin actively resisting, join us in the Injustice Boycott and start completing the daily actions! This has been very helpful for me in knowing where to direct my efforts. http://www.injusticeboycott.com/ • #reclaimmlk #istandwithjohnlewis #blacklivesmatter #denver #marade

A bitterly cold day today. Will not lie and say that it was easy to attend (Imagine if Dr. King had stayed in his bed on cold mornings however). The Marade was energizing and full of positive energy. Glad I got to share it with my family and my DPL fam. #Marade #martinlutherkingday #dayonnotadayoff #service #denvermarade #denvermarade2017

A photo posted by Josh Lee (@escritor_jhl) on

A photo posted by Rebecca Lipman (@beccapiglet) on

A photo posted by The Hills Church (@thehillsdenver) on

"Our lives begin to end the day we become silent about things that matter." -Dr. Martin Luther King. Rain, snow or shine I will continue to fight for what's right. ✊🏽 #lalucha

A photo posted by Cristal Cisneros (@cccisner) on

A photo posted by Misun (@mintyoh) on

A photo posted by Chris Burley (@ctcircusfreak) on

A photo posted by Charlotte Clothier (@charlotteclothierphotography) on

A photo posted by Charlotte Clothier (@charlotteclothierphotography) on

We still fighting with you Martin. We still preaching about love and using it to put out hate 💕 love is infinite while hate consumes. Love will always win and always has. ❤

A photo posted by Abril Rosita 🌙 (@cosmossoulxo) on

MLK Marade in the snow.

A photo posted by Nuriel Heckler (@nuriel1175) on

Proud to March with the staff and leadership of the ACLU in Colorado - but even more humbling to honor Dr. King on this day. #denvermlkparade #aclu #mlkday

A photo posted by Ali Pavlica 🌄 (@aliraepav) on

A photo posted by Kelly Guest (@colorado.kell) on

A photo posted by Millie Constantino (@millieconstantino) on