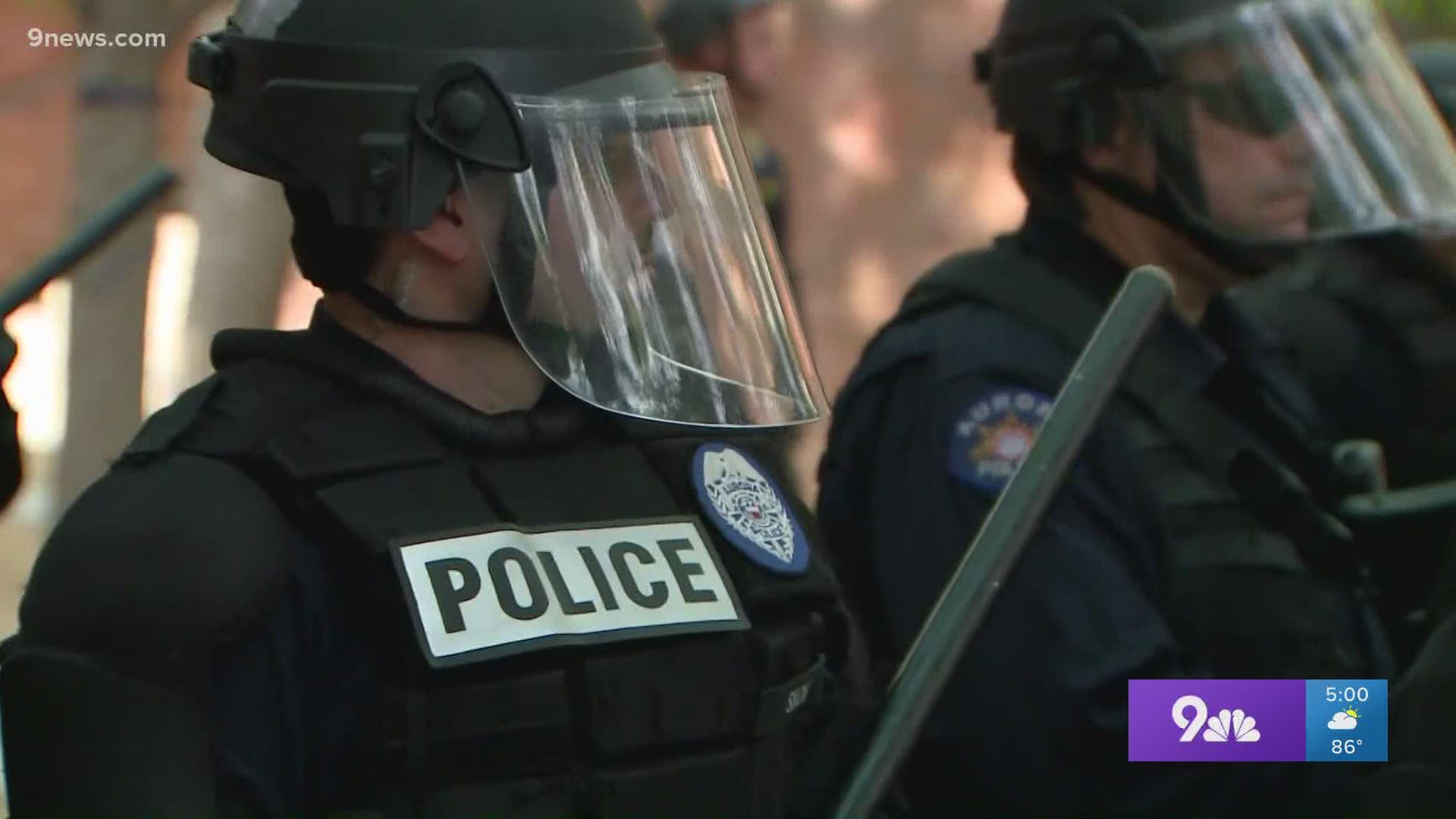 AURORA, Colo. — The Aurora Police Department (APD) said tensions have calmed as demonstrations over the in-custody death of Elijah McClain stretched into the night.

The first of two demonstrations began at 1 p.m. at APD headquarters at the Aurora Municipal Center. The second protest followed at 4 p.m.

Just before 3 p.m., thousands of participants marched from Aurora Municipal Center, west on East Alameda Parkway and onto Interstate 225. After a closure of I-225 from East Mississippi Avenue to East 6th Avenue, the interstate reopened.

But the peacefulness didn't last; tension grew at the fence outside APD headquarters.

APD tweeted about 7:45 p.m. that tensions remained high and that orders to step off the fence and move back were not being followed. They urged protesters to remain peaceful. Anyone who crossed the fence at the APD entrance was subject to arrest, police warned.

At 8:16 p.m., APD tweeted that a small group of protesters were arming themselves with rocks and sticks and were continuing to ignore orders to move back, and police declared it an unlawful assembly.

APD said via Twitter soon after that members of the crowd were throwing rocks and bottles, and that officers had begun to use pepper spray. Peaceful protesters were urged to move to a parking lot near the library.

Soon after 9 p.m., APD tweeted that protesters had stopped throwing rocks, sticks and bottles at police officers and that tensions had calmed. Three people were taken into custody for violating lawful orders after warnings were given, APD said.

"We not only recognize a person's right to freedom of speech and expression; we support and protect their right to do so in a peaceful manner. A peaceful demonstration, like the one planned here today, allows their very important voices to be heard. It promotes meaningful conversations and brings about purposeful change. Our community is reeling from the tragic loss of Elijah McClain who was not only a beloved son, brother and friend, but also a valued member of our community. Today, the men and women of the Aurora Police Department are here merely to ensure peace is maintained."

A description on Facebook of Saturday's rally says the protesters want the APD officers who restrained McClain and the Aurora Fire Rescue personnel who administered the sedative to be fired and face criminal charges.

Arapahoe County closed CentrePoint Plaza, which was near the Municipal Center, on Saturday because of the demonstrations and road closures in the area. The closure included the Voter Service and Polling Center at CentrePoint Plaza.