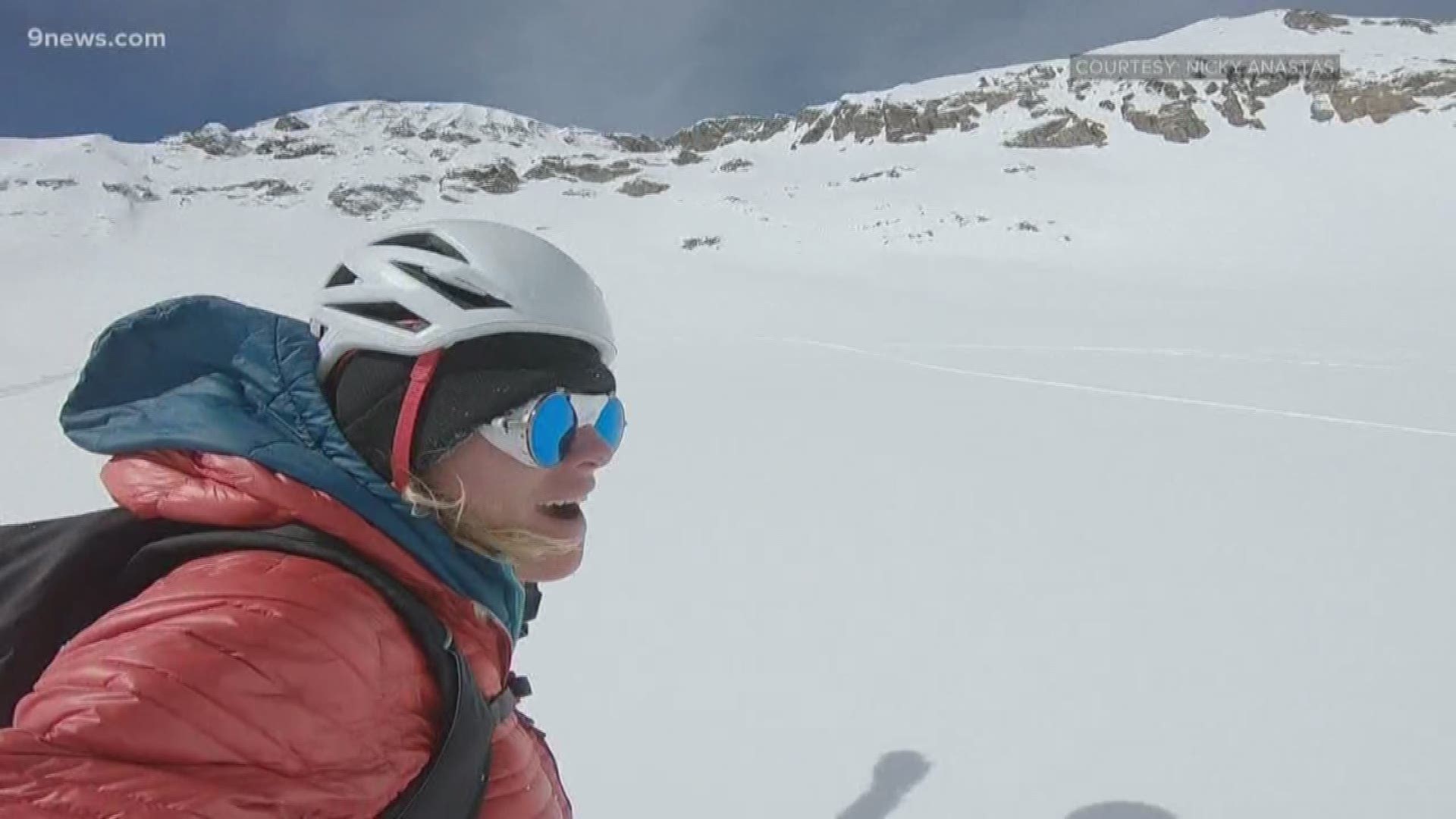 ASPEN, Colo. — Finding the right path in life can be more complicated than it seems.

Laura Hadar spent much of her life on the edge of her snowboard riding in Half-Pipe, Slopestyle, and Big Mountain free-ride competitions. But, when the spotlight ended, her drive didn't.

"I was a professional snowboarder for over a decade," Hadar said. "I was a bit depressed and lost and it was actually finding Nicky and finding the mountains which really started to give me a greater meaning."

Hadar met Nicky Anastas on Castle Peak during her first-ever backcountry ski trip in Colorado. This was the first 14er she'd ever snowboarded down, giving her something she had missed since competition.

"I think that's when I realized that adrenaline was a drug I was addicted to," Hadar said.

Anastas understands what his girlfriend was going through.

"This transition period for a lot of extreme athletes is very difficult," Anastas said.

After Castle Peak, Hadar wanted another go. So, she and Anastas set out to climb and ride down North Maroon Bells. That's when the couple had what they call a crazy idea.

"We realized that there was a really good chance that no other female had snowboarded all the 14ers and it was something that excited both of us," Hadar said.

RELATED: Storytellers: From a kid's collection to a world record

RELATED: Storytellers: Honor Bell tolls for the fallen and its founder

So, Anastas started shooting video of every ascent to make a documentary on Hadar working to be the first woman to ride down all 58 Colorado 14ers on a snowboard.

"I think it was really born out of this dream to like go out and find your own path," Hadar said. "Even though it may not pay the bills, it can give you more emotionally and spiritually."

Hadar said some days are exciting. But, some are lacking.

"A lot of times just like crappy snow coverage I feel like is a common theme," Hadar said.

While some days seem pretty easy, Hadar said, some days are pretty scary.

"There's ones where like you'll die," Hadar said. "If you don't have the right experience, you should not be up here."

Anastas said they have to be flexible.

"We're pretty spontaneous and open with planning," Anastas said. "You have to be with this type of project because the conditions are so touchy for each mountain."

Hadar admits there are days to forget.

"You're like, oh that was fun, I think. Like it was fun in retrospect, but was it really even fun at all?" Hadar said.

While the film they're making, called "Shred the 14ers," seems like an adventure, Hadar and Anastas said it is really a story about love.

"I had me this super handsome, cute boy," Hadar said. "Our whole relationship has been kind of accelerated, you know, 'cause we met and we're like already doing these crazy things together and then we spend so much time together and then really high-consequences situations. So, I think it kinda accelerates everything."

Anastas said their love is apparent in the film, even though they fight off-camera just like everybody else.

"The dynamic of the relationship has kind of taken its own personality and we're really at a comfortable place with that," Anastas said.

As evident on the video, they are comfortable being uncomfortable scaling rock walls 14,000 feet above the sea.

"Even still, we're three years down the road now and we've been chipping away at the project," Hadar said. "We're so close to finishing this year."

She is so close to finding that path in life that few if any can follow.

"Even if we never do make the film or if I edit for days and nothing comes out," Anastas said, "our experience is definitely the main reason why we did it."

If you want to follow their adventures, they have a blog set up: https://www.smartwool.com/blog/shred-colorado-14ers.html.

Hadar said this mission is not just about 'shredding' the 14ers.

"I think there's definitely an element of mental health," Hadar said. "Finding your place in this world and just like, inspiration."