Three of the candidates vying for the Colorado Democratic gubernatorial nomination debated ahead of the state assembly. 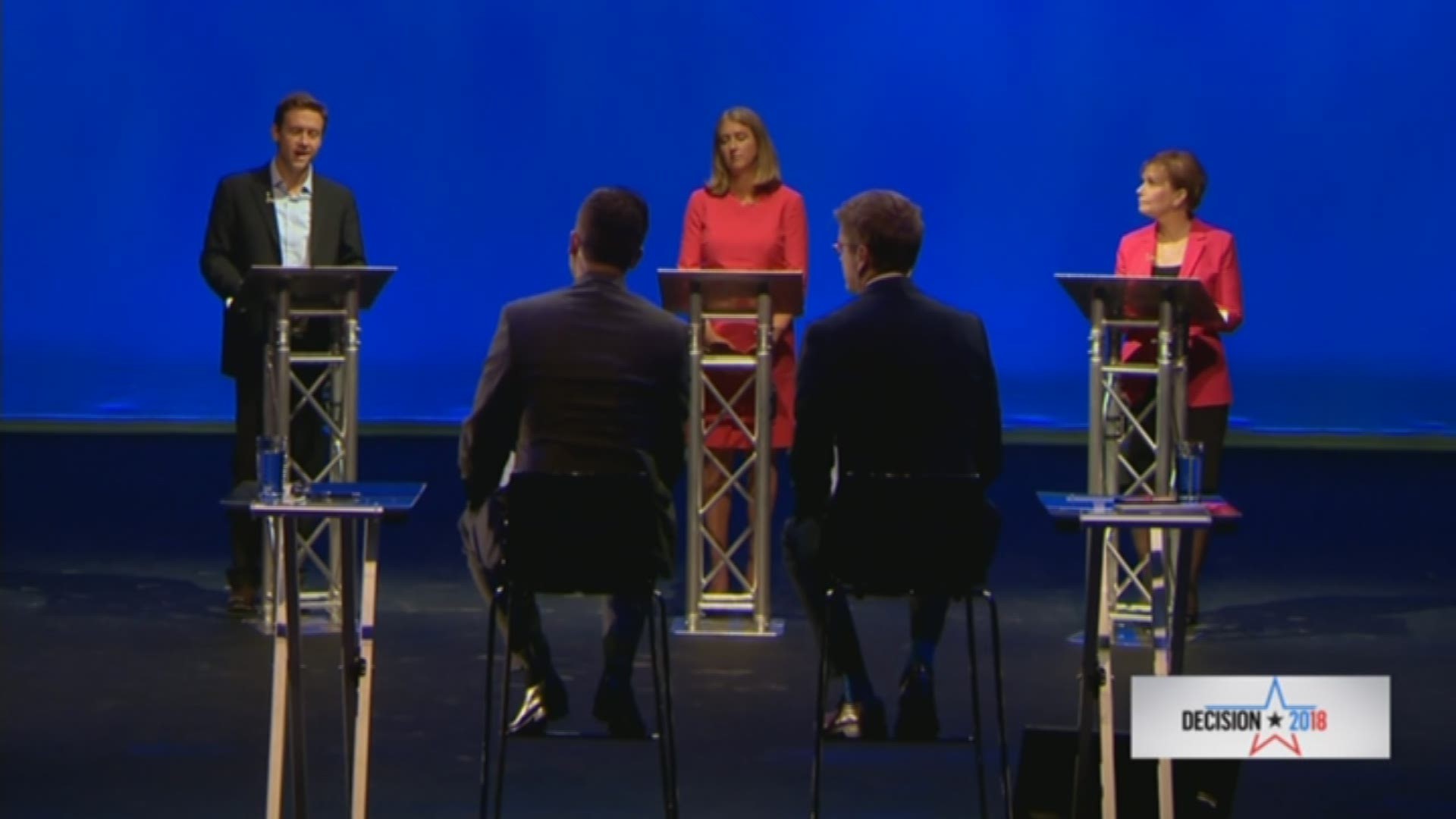 KUSA — The three candidates who agreed to participate in 9NEWS’ Democratic gubernatorial debate Wednesday evening were largely in agreement on issues like gun control, TABOR, healthcare, immigration and the #MeToo movement – and each didn’t provide a definitive answer about whether they would give death row inmate Nathan Dunlap a reprieve.

This debate was held three days before the Colorado state assembly, which will determine who ultimately makes the primary ballot.

THE REPUBLICANS | What happened during the Republican gubernatorial debate

Former state treasurer Cary Kennedy is the only candidate who participated in the debate at 9NEWS who will vie for the 30 percent of delegate votes needed to participate in the primary (she had a surprise win the Colorado caucus). Former state senator Mike Johnston and Lt. Gov. Donna Lynne also participated in the 9NEWS debate, but they’ll rely on petition signatures to make the ballot.

Rep. Jared Polis (D-Colorado), a frontrunner for the Democratic nomination, declined to participate Wednesday. He will present his case to some 4,000 delegates at the state assembly.

9NEWS’ Kyle Clark and Brandon Rittiman moderated Wednesday’s debate. Here’s a look at some of the topics the candidates discussed over the course of 60 minutes. You can find the full debate below:

Editor's Note: Due to a technical error at the beginning of the debate web stream, the first two minutes of the broadcast are omitted in this video. However, all of the questions and answers from the debate are included. The candidates did not make opening statements.

READ | Introduction of the debate 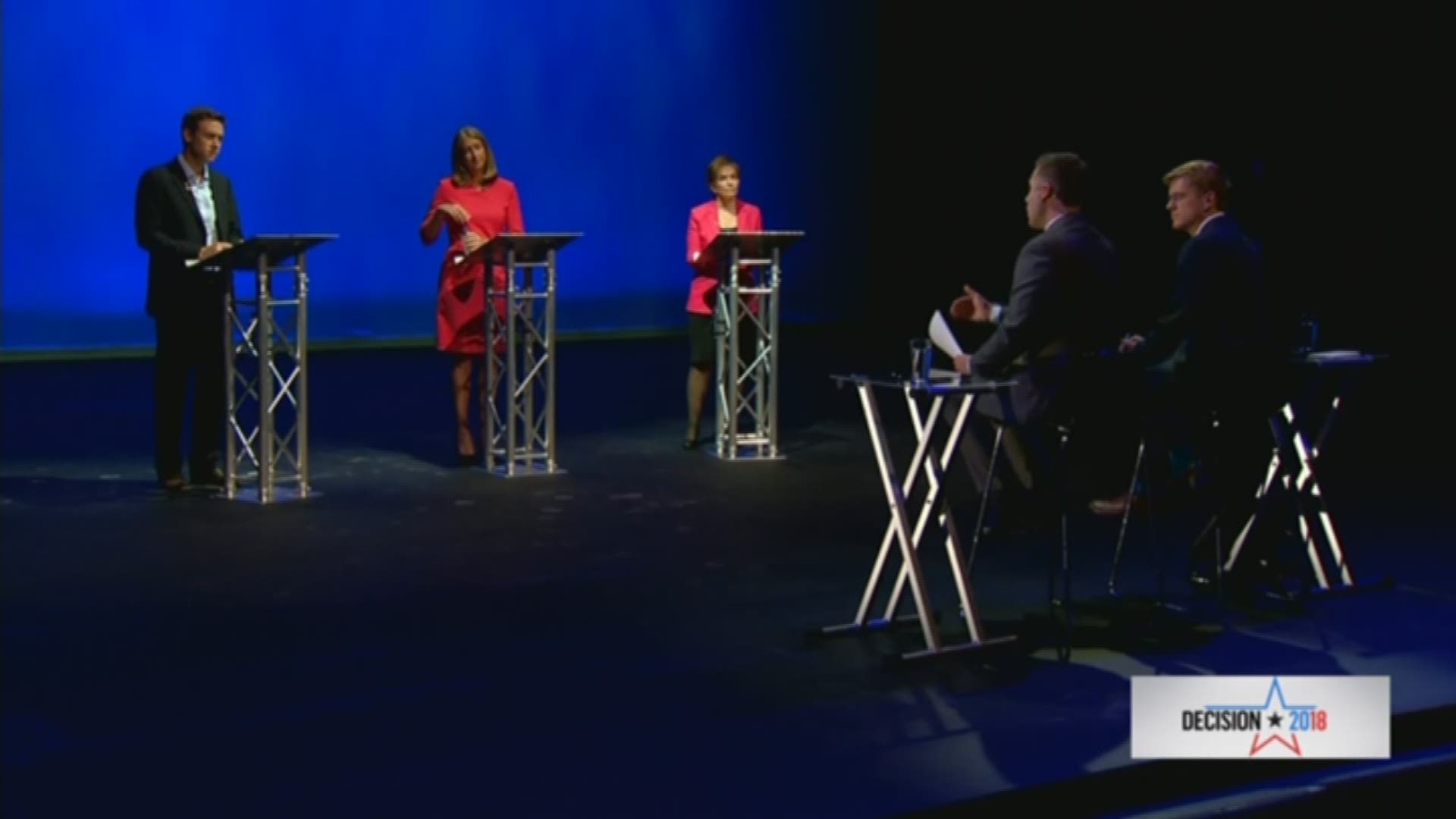 All three candidates said they support stricter gun control in wake of the multiple recent mass shootings, however, only Kennedy went as far as to say military-assault weapons should be banned outright.

Johnston said that the most significant part of assault weapons is the “size of the magazine,” something he says he has already helped regulate.

Lynne was specifically asked about mental health, saying that part of the discussion should come down to “culture and changing a culture.”

She conceded that doctors do not need to know which guns patients have, but that whether they are armed should be a discussion they have. 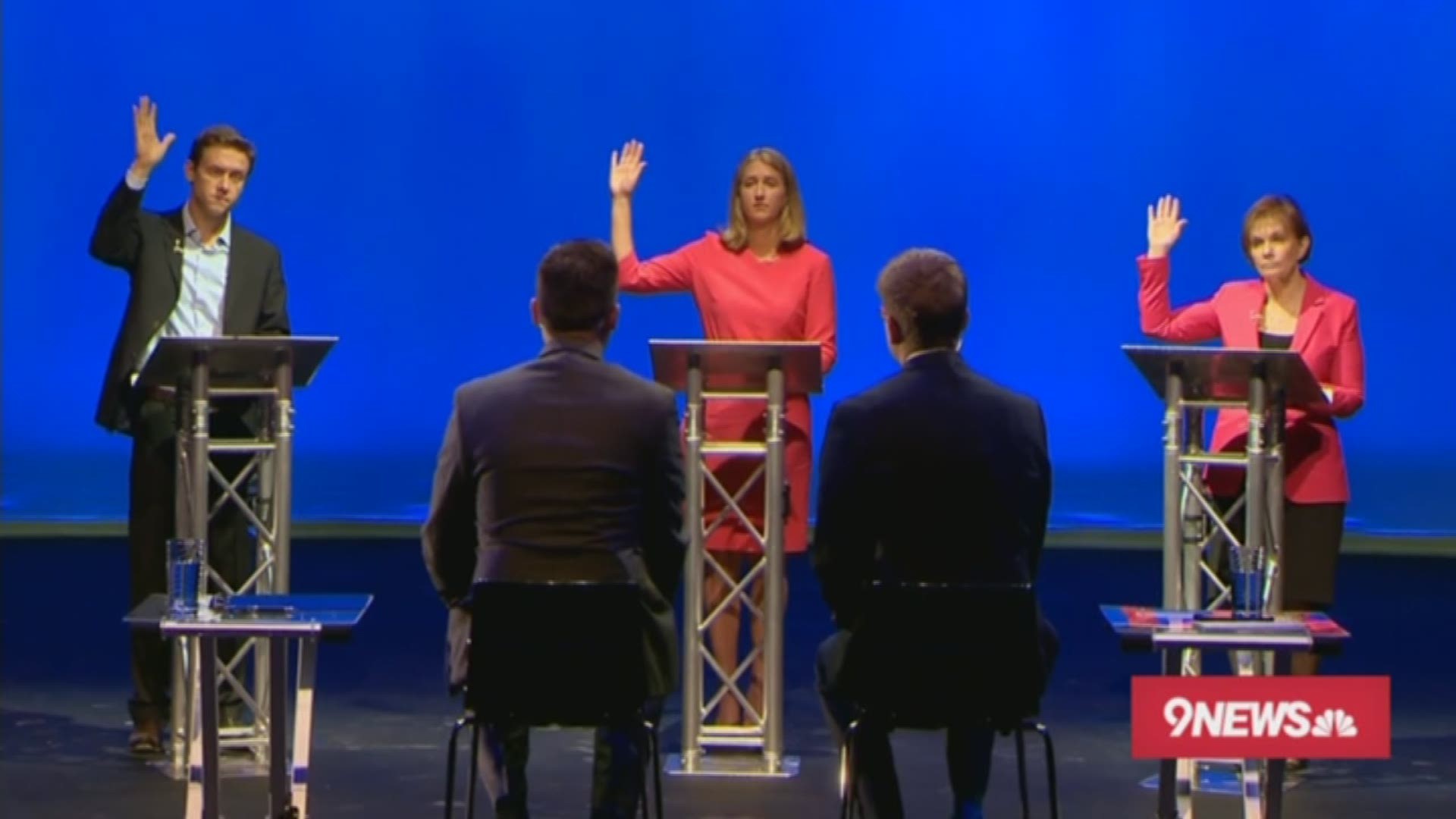 By a show of hands, Johnston, Kennedy and Lynne all agreed that the state legislature was correct in expelling Rep. Steve Lebsock (D-Thornton) and trying to expel Sen. Randy Baumgradner in wake of allegations of sexual misconduct.

But by another show of hands, not a single one of the candidates said Denver Mayor Michael Hancock should also be disciplined after he admitted to sending sexually suggestive messages to a security officer.

Kennedy, who worked in the mayor’s office, was the only candidate asked directly about the issue, saying that while “his conduct was clearly inappropriate” he was only a first-rate professional when she encountered him.

No definitive answer on the future of Nathan Dunlap 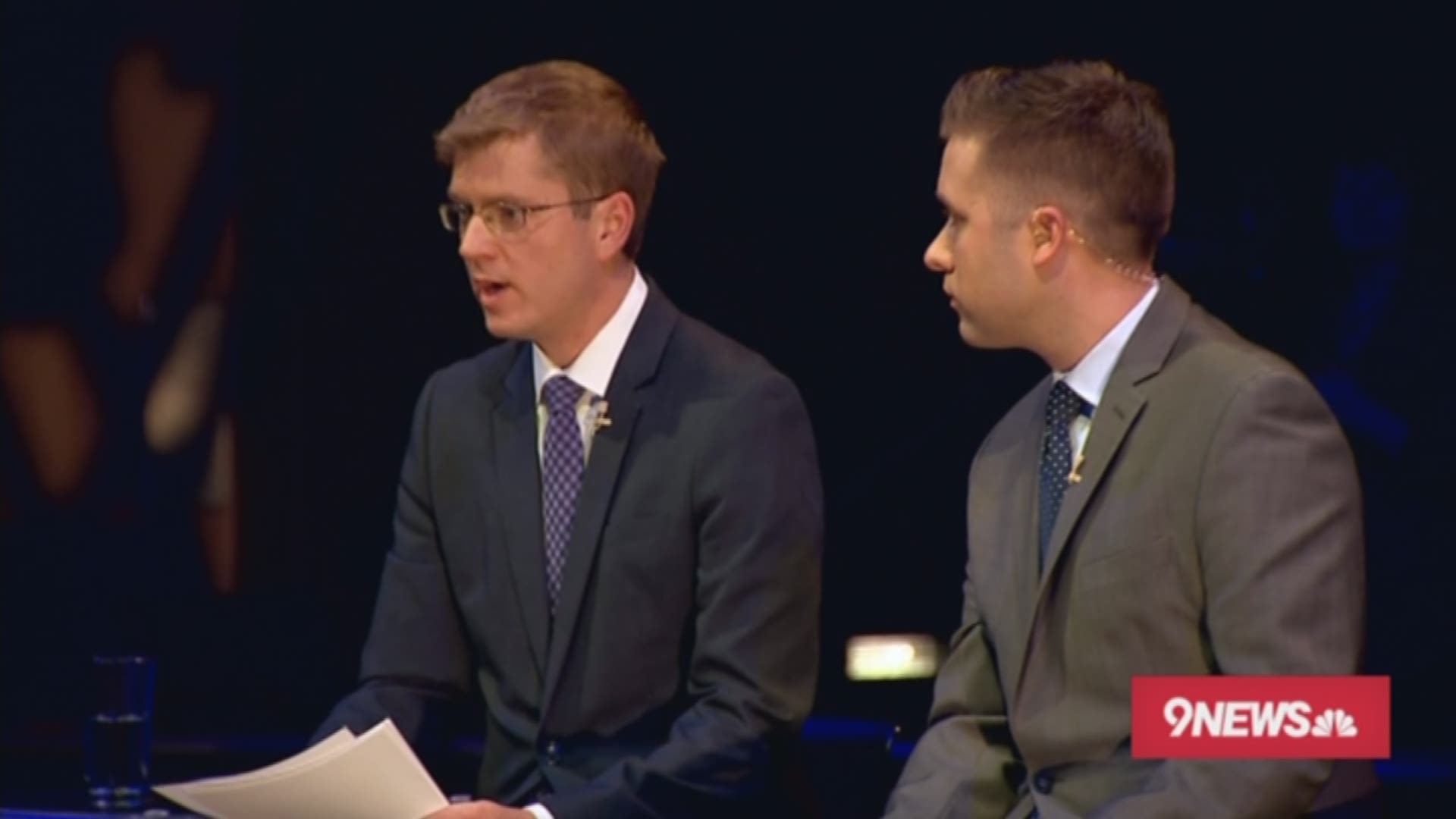 When asked outright what they would do about death row inmate Nathan Dunlap should they be elected governor, all three candidates agreed they opposed the death penalty … but would not go as far as to say that they would give the convicted murderer a reprieve.

All three said if elected, they would solicit more information about the case before making a decision.
Gov. John Hickenlooper has previously said he would leave Dunlap’s fate up to Colorado’s next governor. This is the second election where whether he lives or dies is dependent on the result. 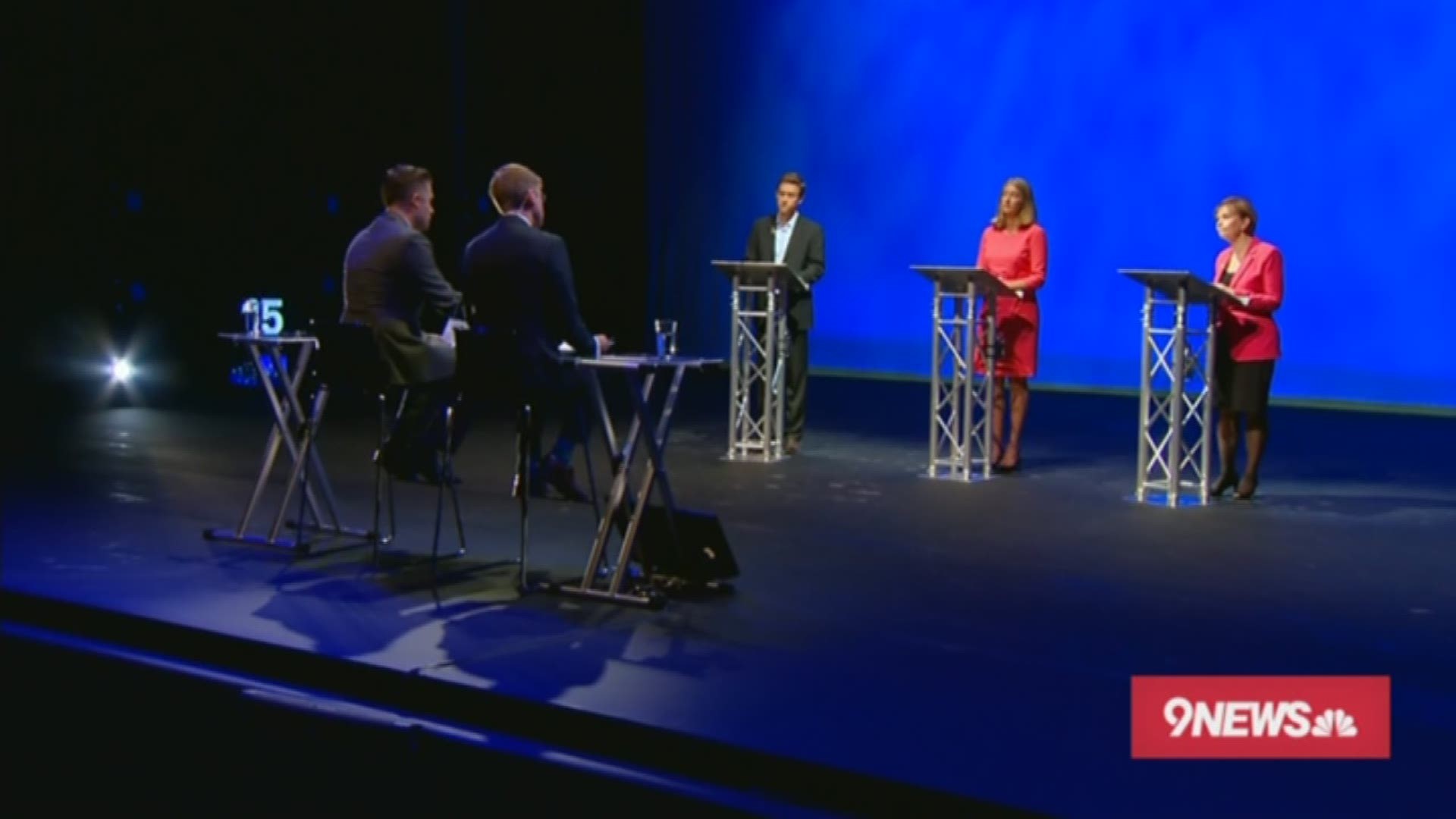 The three candidates were largely in agreement that Colorado should report major infractions involving people here illegally to ICE, but that reporting minor ones would do more harm than good.

The point of disagreement, however, was whether a DUI warranted a report to ICE.

Johnston said yes. Lynne said no. And Kennedy said she would need to think about it.

Kennedy was the source of some controversy after she announced her candidacy for governor from the driver’s seat of a moving car via Facebook Live.

She conceded that she was trying to do it safely, though if her teenager did the same thing, she would probably ground them.

During a discussion of TABOR, the three candidates all agreed that Colorado voters should be allowed to vote on tax increases -- since it's something they've been able to do for so long. 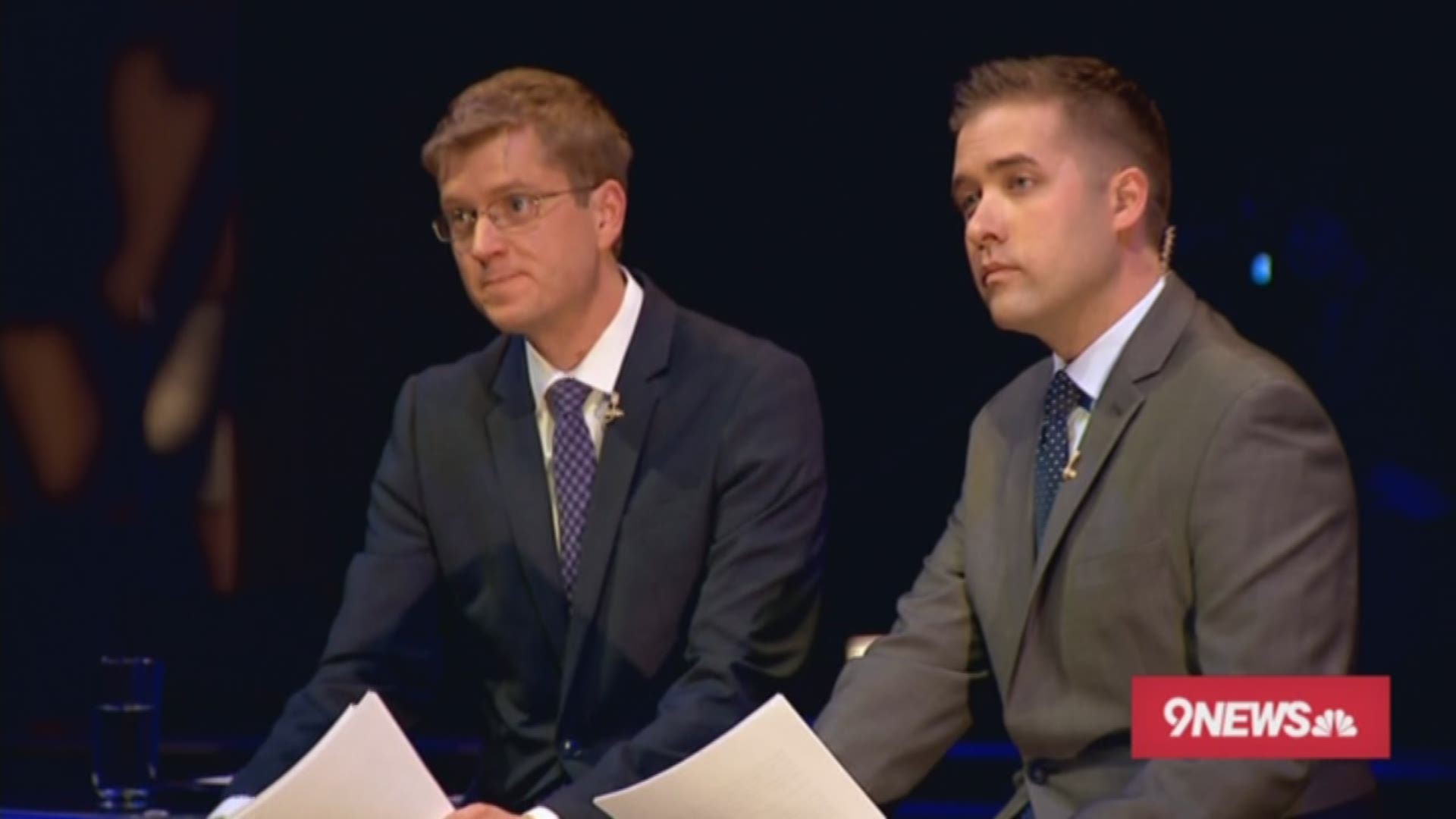 All three candidates were later asked to raise their hands if they supported Bernie Sanders over Hillary Clinton in the 2016 primary. No one did – which meant there was time for one more question about the large I-70 project on the north side of Denver.

Democratic candidates also discussed public education, affordable health care, local government control over oil and gas and their choice of social justice issues that they felt were most important to discuss. You can hear all that as well as the debate's closing statements below. 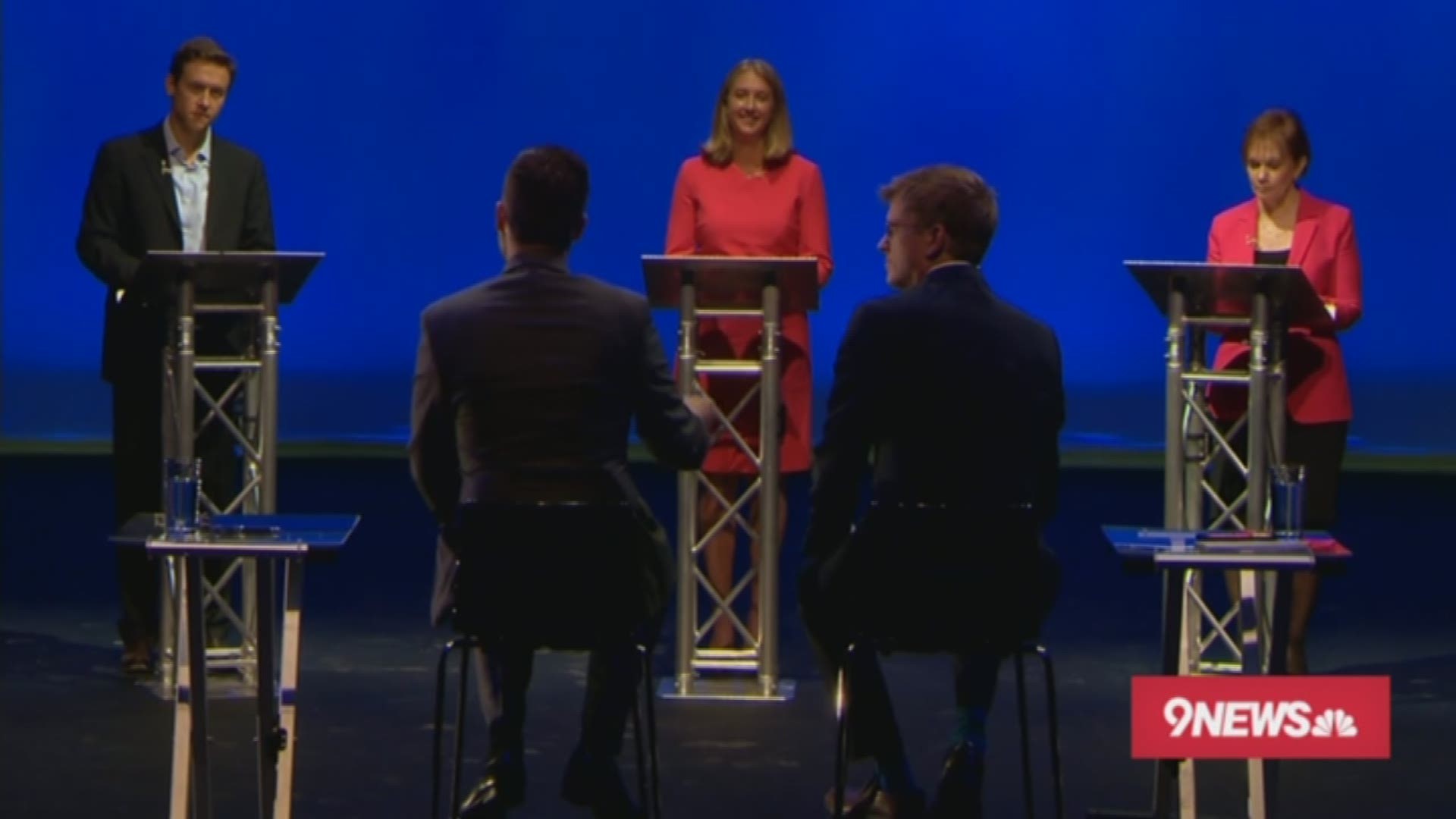 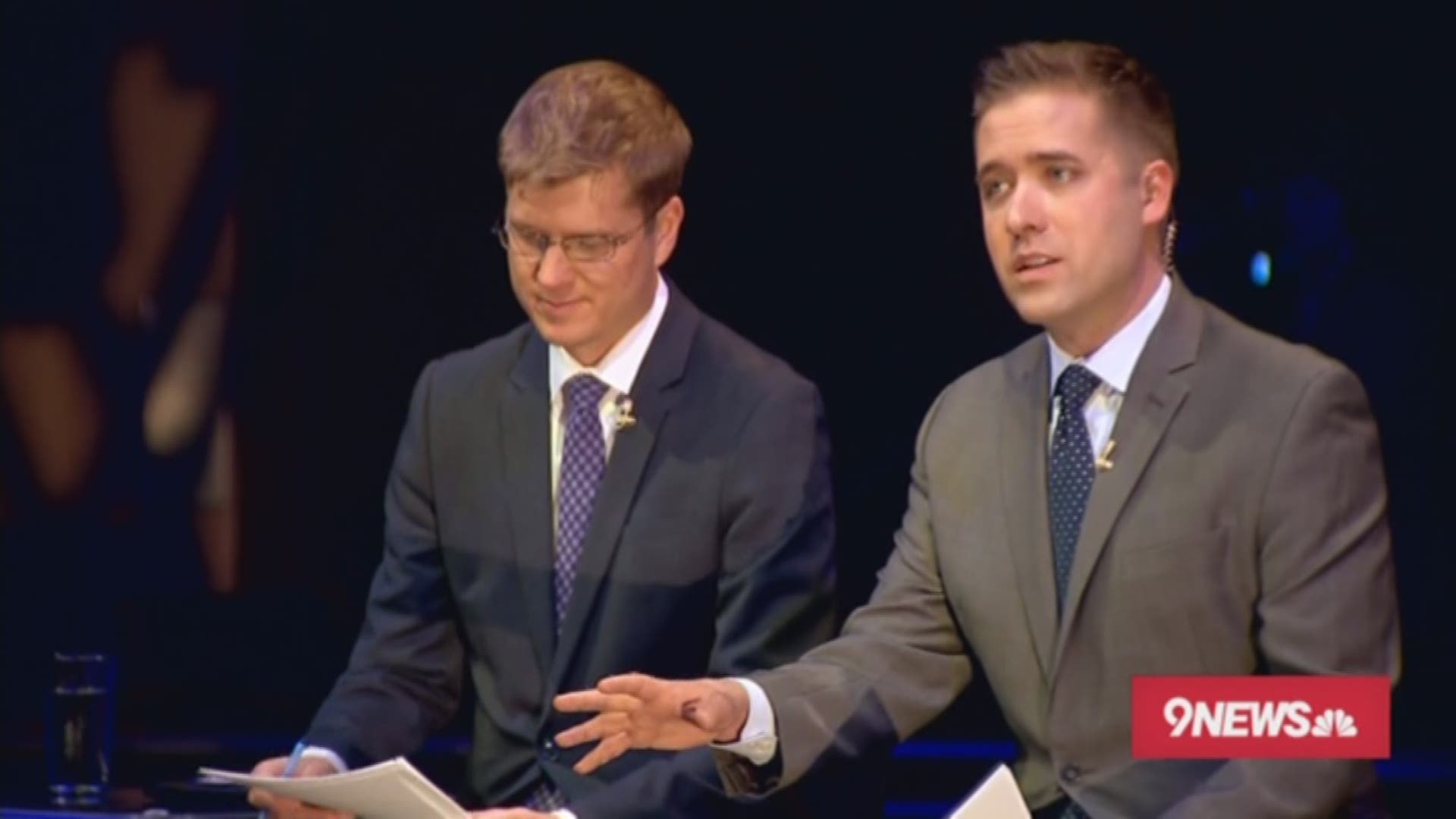 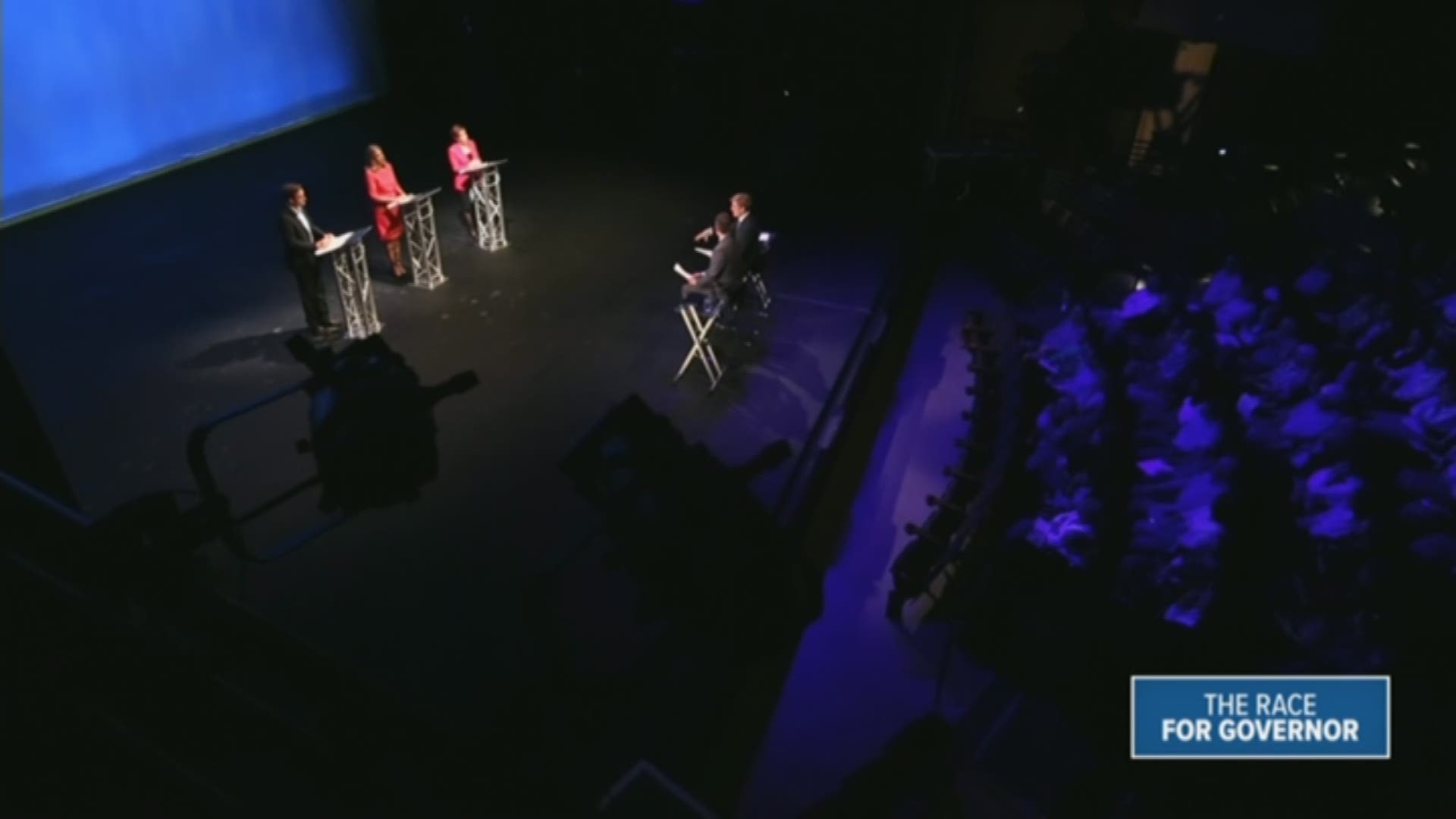 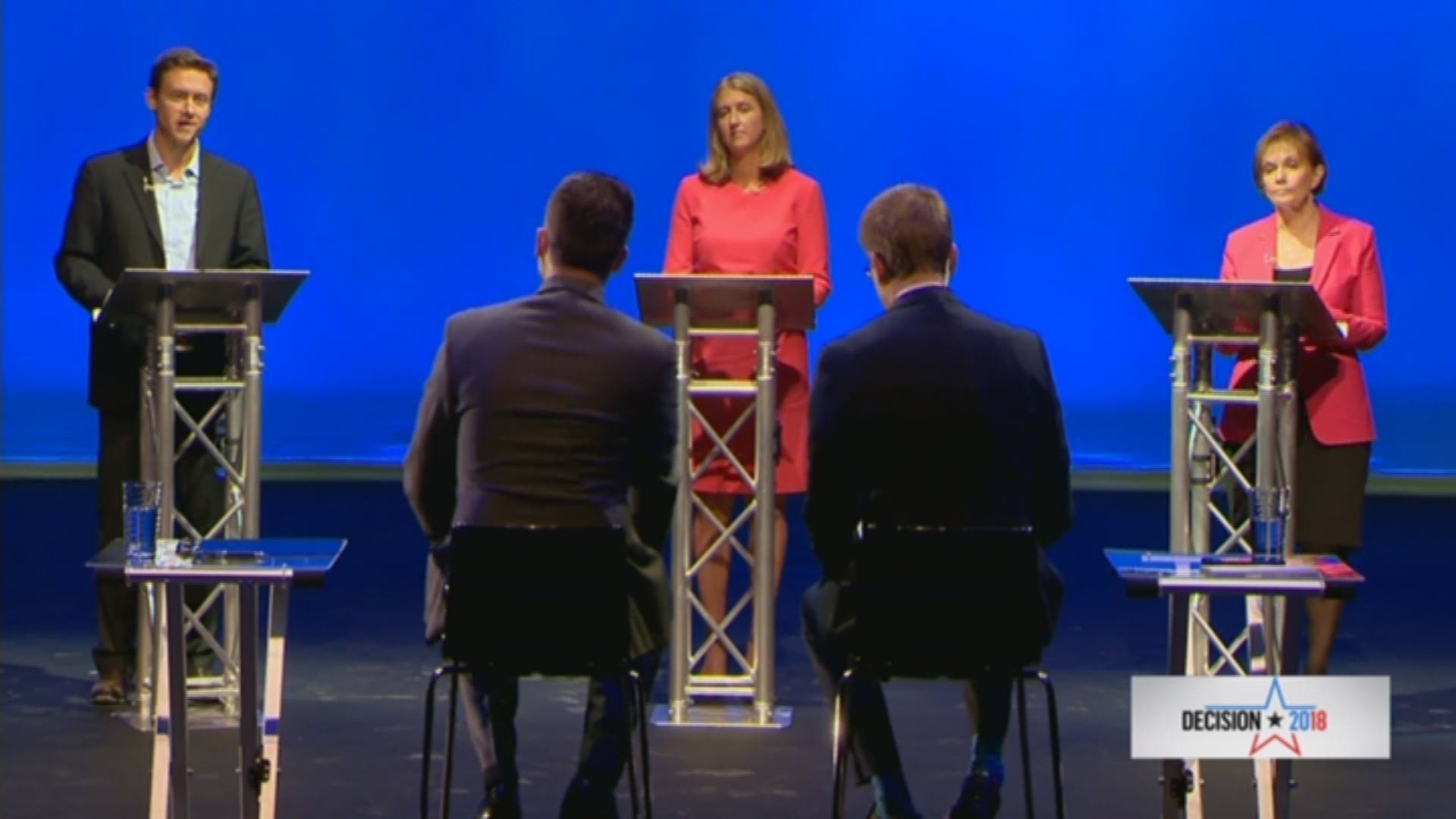 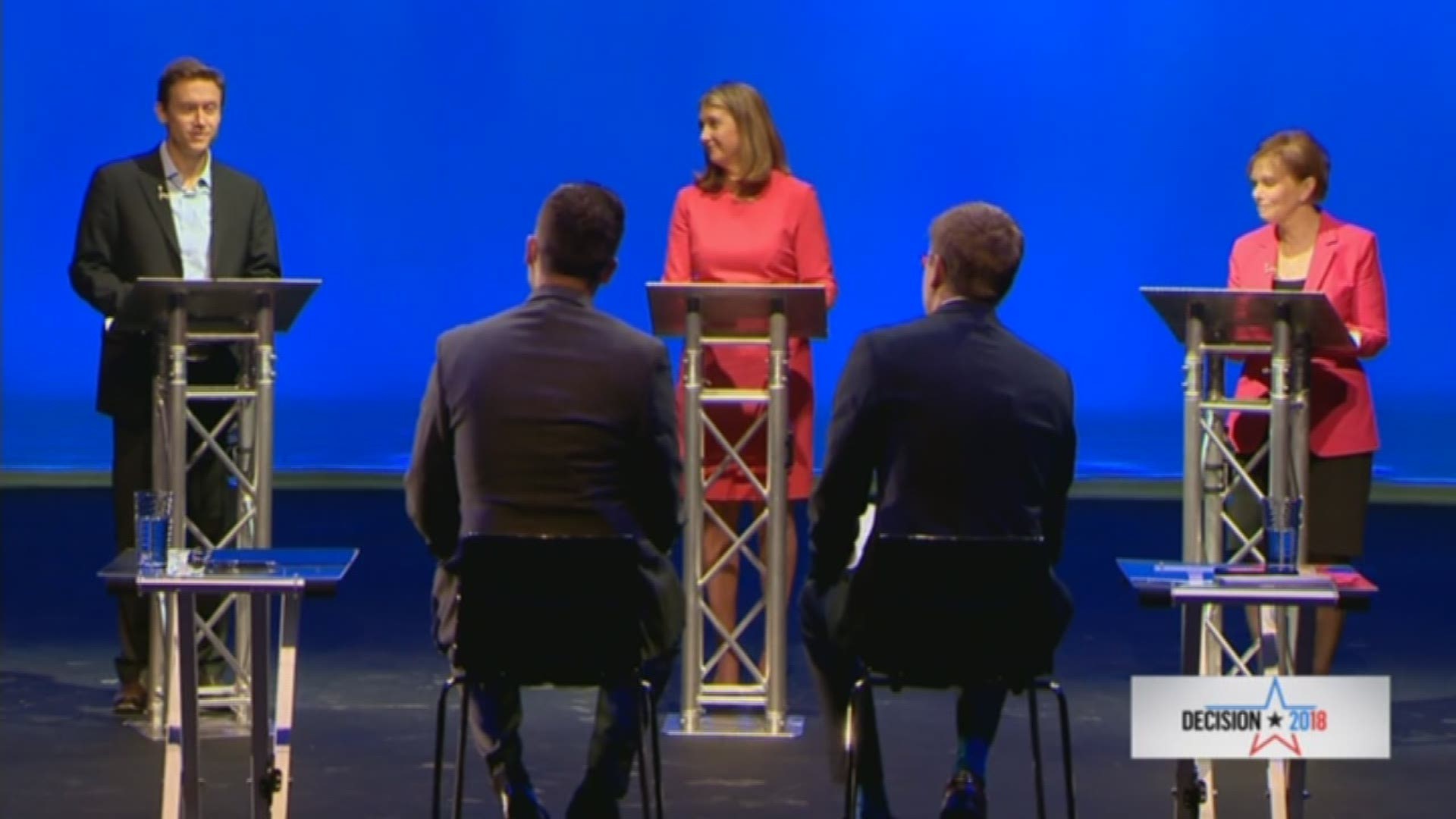 Businessman Barry Farah was on the list of candidates planning to attend the debate, but suddenly backed out on Tuesday. State Treasurer Walker Stapleton and State Attorney General Cynthia Coffman will not participate.

This debate will also be hosted by Kyle Clark and Brandon Rittiman.