The Regis Jesuit senior and Washington University commit pushed basketball to the backburner to help her father with his stage 4 melanoma last year. 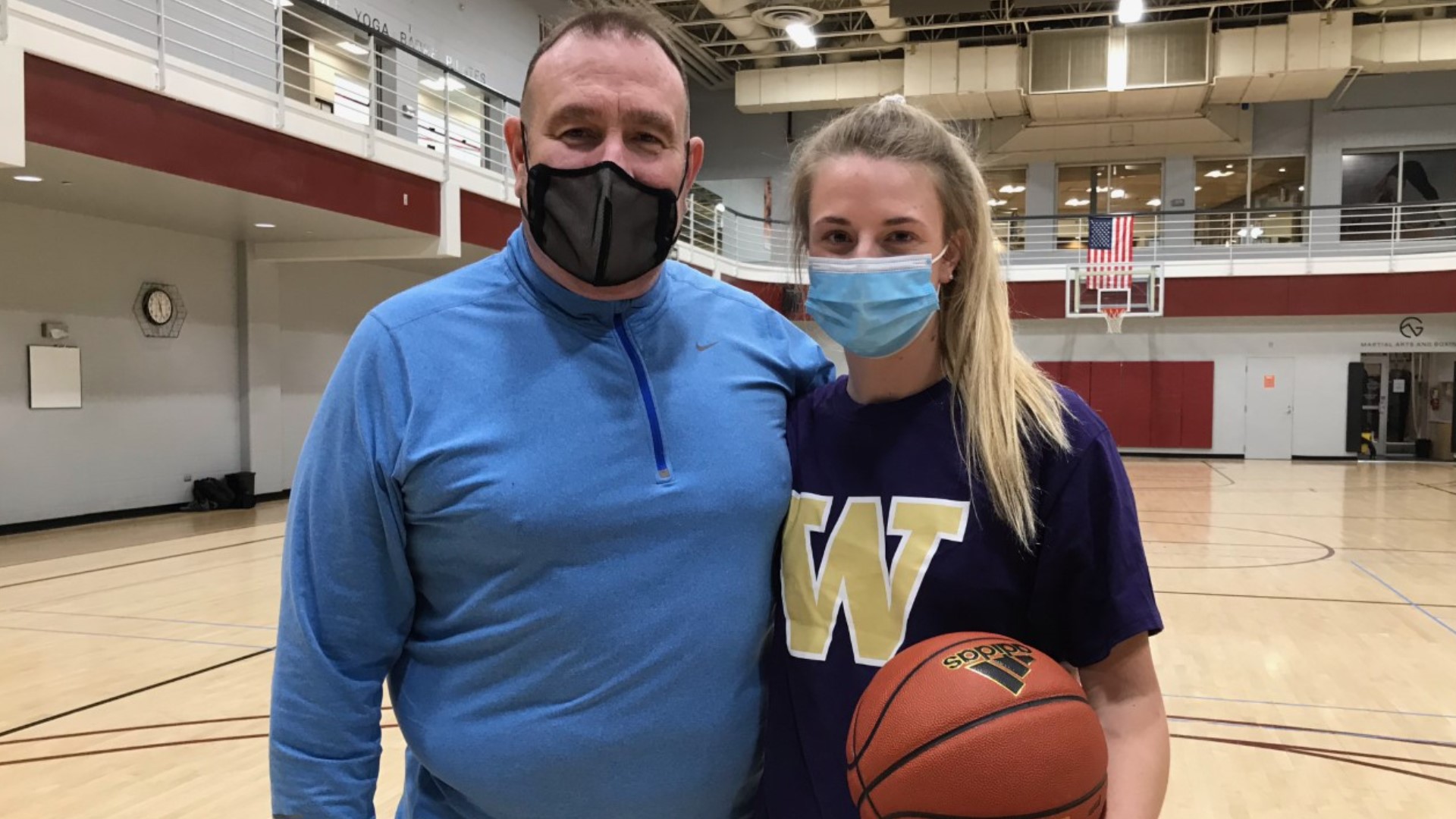 GREENWOOD VILLAGE, Colo. — Avery VanSickle hasn't let a little injury stop her in the past. After bouts with mononucleosis freshman year, kidney stones sophomore year, a back injury later that year, and most recently bone spurs requiring knee surgery on her patellar tendon, the Regis Jesuit senior is finally back on the court.

"I was winded, I was not in shape at all, but I was just really happy to be out there with my team," she said.

The scars are there to remind her of all that she's had to endure and overcome throughout her high school career.

"I try and alter my perspective," she said. "If I hadn't gotten the surgery, it would've still been hurting me more than it is now, but at least now I'm on the way to recovery."

VanSickle said she was hopeful for an eventual season of no pain, and she feels like that may be on the horizon. But no pain didn't just mean no more knee pain as she sprints down the court.

"I'm really, really hopeful. I'm always finding the little things that help me to enjoy basketball. It's not life and death."

She knows the difference, unfortunately. Her father Bryan toed that line last year.

"Stage four melanoma," he said. "I had a mole on my back, they said it was melanoma, they said I was clear, two years later, it was everywhere. As a parent, I never wanted my kid to go through any of that. You kind of want smooth sailing. It shook the family up."

Avery wasn't told immediately. His news came to him after his daughter's first home game junior year. He wasn't about to spoil a great moment, but Avery said she always had an inkling for the next few days.

"Although it was a really shocking and scary moment, I felt comfort in the family in the family that I had around me that we were going to get through it," she said.

The two of them got through their darkest times together.

"It was a lot easier for me having someone in the house fighting through something not necessarily similar, but we both had a battle on our hands," Bryan said. "When you look around, sometimes you feel kind of alone fighting cancer and there's not so many support groups. Just to have family around is huge. Our family is pretty tight."

"It's unbreakable, I don't think you could break it," she said. "With him specifically, he's been my rock through my whole life. He's kind of the person I go to for advice. If I'm having a bad day, he's the one that makes me feel better."

His rock, however, has always been his wife Tami, an anesthesiologist, who consistently provided the family with knowledge and hope.

"She's just honestly a rock. She's carried us many nights when we didn't know what was going on. She gave hope that you can get into remission and you can contain cancer," Bryan said.

It was tough on all of the kids to see their typically strong mother crumble under the emotional pressure.

"To see him struggle so hard with an illness that she can't control, was one of the hardest things for all of us to see," Avery said. "She did everything you could imagine for him. As her daughter, it was incredible to see how much she cared and I look up to that as something that I want to be like when I get older."

Bryan and Avery called Tami on Zoom to say how much she meant to them during the last year, since she was at work. Tami was choked up.

"I respect and love you guys more than anything," she said in between tears. "I would do anything for you and I think we've done so much for each other to keep us all afloat. There's not one of us that is more important and we've needed each to get through what we've been through this year."

Their admiration is nothing short of inspiration. Bryan is now in remission and has set goals for his future with his family.

"I wanted to give myself goals that I could attain and it was a good stretch and I'm going to make it," he said, optimistically. "I wanted to get all four of my kids graduated from high school and into the real world, and from there, it's all gravy."

Avery is committed to the University of Washington and will be attending next year. She's currently a McDonald's All-American finalist, a four-star prospect, and the 85th best in the nation.

The VanSickles have three other children: Oldest sister McKay is away at Calvin University, younger brother Archer is a sophomore at Regis Jesuit on the boys basketball team, and Quinn is an up-and-coming basketball star in 8th grade.