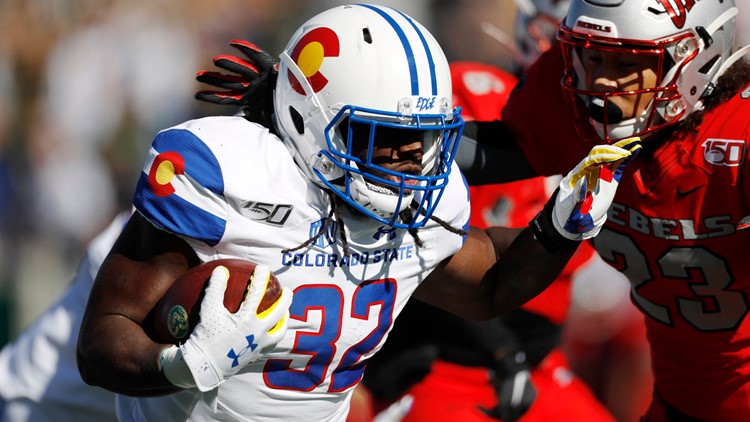 Photo by: AP
Colorado State running back Marcus McElroy, left, bulls past UNLV defensive back Greg Francis to run for a touchdown in the first half of an NCAA college football game Saturday, Nov. 2, 2019, in Fort Collins, Colo. (AP Photo/David Zalubowski)

FORT COLLINS, Colo — Anthony Hawkins returned the opening kickoff 99 yards for a touchdown and Colorado State never trailed in a 37-17 win over UNLV on Saturday.

Warren Jackson had six catches for 133 yards. Christian Hunter, Marcus McElroy and Jaylen Thomas each ran for a touchdown for the Rams (4-5, 3-2 Mountain West Conference). Hunter led the way in production on the ground with 12 carries for 79 yards.

Jackson set a Colorado State record for most yards receiving in a four-game span, amassing 657 yards. He passed Michael Gallup, who had 644 yards over four games in 2017.

McElroy and Thomas scored in the first quarter and Cayden Camper kicked a 50-yard field goal in the second quarter to make it 24-0 at halftime.

The Rebels (2-7, 0-5) scored both of their touchdowns in the fourth quarter. Kenyon Oblad, a freshman, finished with 280 yards passing and two touchdowns.