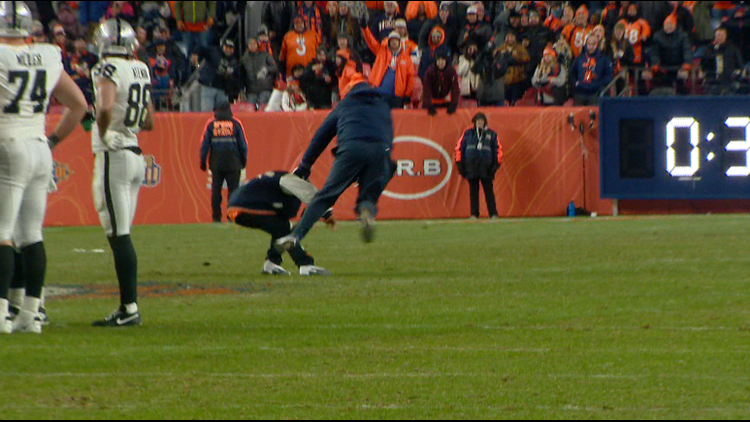 Photo by: Johnny Kuhrt
A 12-year-old boy runs onto the field during the fourth quarter of the Denver Broncos versus Oakland Raiders game causing a security guard to break his ankle.

DENVER — An NFL security guard suffered a fractured ankle Sunday when he attempted to tackle a 12-year-old fan who ran onto the playing field during the fourth quarter of the Denver Broncos game at Empower Field.

"The idea that someone would wind up with a fractured ankle, a serious injury because of someone's inane decision? That's really, really regrettable," said 9NEWS Legal Analyst Scott Robinson.

With less a minute left in the game against the Oakland Raiders, the young fan ran onto the field and was subsequently tackled by NFL security guards.

One of the guards, identified by Denver Broncos Insider Mike Klis as Chris Clark, suffered a broken ankle. He was carted off the field and taken for medical treatment.

The fan was escorted off the field by Denver Police Department (DPD) officers. A spokesperson for DPD said the boy was cited with a trespassing charge that is specific to running onto an athletic playing field. It's unclear how the fan managed to get all the way onto the field in the first place.

Robinson said the situation isn't necessarily a good one for the security guard to file a lawsuit.

Robinson said Clark can only receive workers' compensation claims and not sue his employer. Plus, he said the law prohibits Clark from suing a government entity such as the Metropolitan Football Stadium district, which runs Empower Field at Mile High.

Clark can sue the boy's family, Robinson said, but he added that it wouldn't be worth it.

"Colorado law really limits the liability of parents in such a situation to a measly $3,500," Robinson said. "If the injured guard were to get that money, he winds up having to pay it back to the workers' comp insurance carrier."

Robinson said the penalty for this charge is weak, with a fine of up to $999 and a light sentence.

"The most you can be incarcerated in a juvenile facility on a municipal ordinance offense is 48 hours," Robinson said. "That's not a lot of punishment for an event that has caused at least one individual a pretty serious personal injury."

Once Clark was taken off the field, the game continued. Despite a last-minute touchdown by the Raiders, the Broncos held on to win the game 16-15 when the Raiders failed to connect on a 2-point conversion attempt.

The Broncos finished the season 7-9 but ended on a high note with rookie quarterback Drew Lock going 4-1 in his five starts this season. 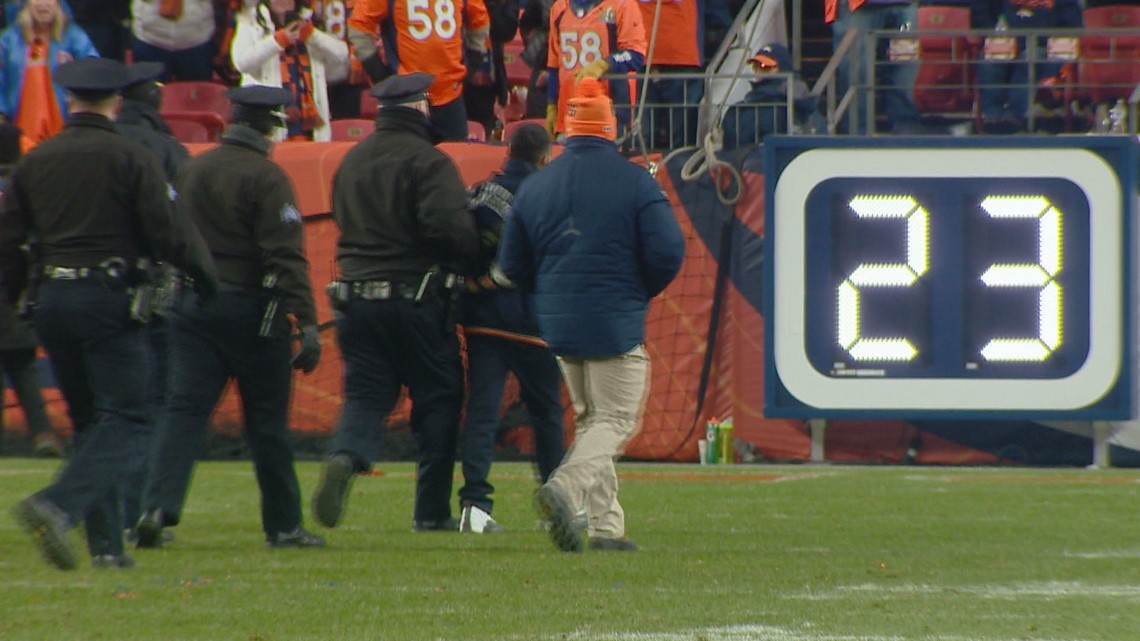 RELATED: Elway seems to have picked right coach and QB, but more work needed in his 10th season as GM

“You have to talk to John Elway and Peyton Manning,’’ Lock said after Sunday's game. “One’s in our building and one’s been talking to me and leading me through these five games, and I appreciate him doing that for me.”