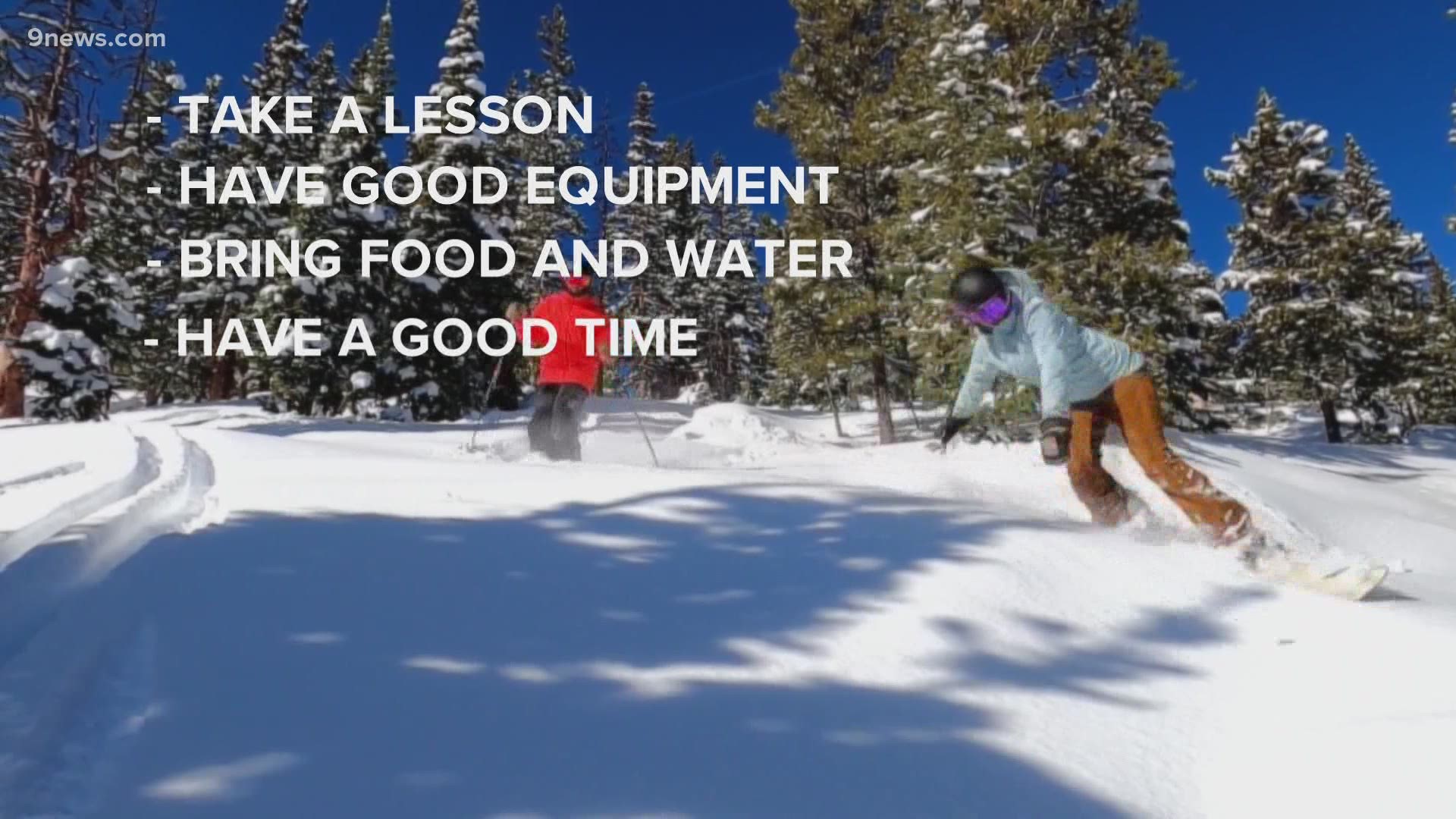 ASPEN, Colo. — Sarah Hay arrived in Aspen in March, only to find resorts dormant. She tried hiking up Aspen Mountain with her snowboard, but didn’t make it far.

She was at the Cripple Creek Backcountry gear shop in Aspen Highlands recently when she heard the manager say they were down to just one splitboard, a snowboard that splits into two wide skis for skinning uphill.

“He said it probably wasn’t going to be around for long and I just pulled out my credit card,” said Hay, who is scheduled to take an avalanche safety course before venturing out on her Jones Dreamcatcher splitboard. “I just feel lucky I was able to get a set up. It’s my insurance. Just in case everything goes to s*** again, I’m super psyched to have a way to get out and explore the mountains.”

> Video above: Tips to keep you safe on the slopes this ski season.

Uphilling newcomers like Hay — who came to Aspen from Amsterdam — are driving spectacular growth in backcountry sales this fall and early winter. Early sales figures from The NPD Group, which tracks retail sales from 600,000 stores and websites, show backcountry sales from August through October pacing 76% ahead of the same period last year. Sales of snowshoes, split boards, Nordic skis, backcountry accessories and alpine touring equipment in the first three months of the winter buying season have already eclipsed total sales from the 2019-20 ski season.

The boom is making critical necessities for backcountry travel almost impossible to find. Skins for climbing, specialized boots and splitboard bindings are so rare that one gear maker expects shortages could limit crowds in the backcountry this season.

Leo Tsuo has seen unprecedented demand for his Weston Backcountry splitboards this winter. And the Minturn snowboard manufacturer is getting tons of calls asking if he has a stash of split board bindings.

“We have straight up been telling people, before you even get the board, get your bindings,” Tsuo said. “My prediction is that in about a month or so the lack of splitboard bindings might limit people’s ability to get into the backcountry.”

For years, steady sales of backcountry skis, snowboards and accessories like avalanche beacons have been the darling of the snowsports retail market, ranking as a small, but fastest growing segment of the industry.

Sales of backcountry stuff exploded in the spring, when ski resorts across the country shut down to help limit the spread of coronavirus and skiers scrambled to keep turning. That spilled into summer, with outdoor camping equipment and bikes selling rapidly as Americans socially distanced in the outdoors. Now backcountry sales are soaring again as resorts install restrictive reservation systems to control crowds during the pandemic.

“It’s definitely a continuation of what we saw happening in the spring,” said Sean Glackin, whose Alpine Quest Sports in Edwards saw his shelves picked bare in March and April.

August through October sales at Alpine Quest are up about 35% over the same stretch last year. November sales are up 90%, Glackin said.

“Lots of newcomers for sure. I think people who saw the mountains close last season wanted to make sure they are more prepared this season,” said Glackin, who anticipated the spike this winter and increased his orders with gear makers this summer.

Glackin is seeing a mix of skiers seeking powder skis and avalanche safety gear for backcountry skiing alongside others buying lightweight setups for touring and exercise.

He and his team are wondering if things might settle down in January and February. Skiers should be well equipped by then for backcountry travel and resorts will have more terrain open, reducing the possibility of limited access.

“Is this going to fizzle out? It’s too early to tell,” he said. “We were wondering this summer, thinking that it has to slow down at some point and it never did.”

Jackson Renner, a 20-year veteran of the backcountry retail and ski-service scene, opened Gore Range Sports in Silverthorne last month. He doesn’t really have receipts from last year to compare, but business is strong.

“There is definitely a surge right now,” said Renner, whose shop primarily offers tunes and mounts for all kinds of skis. “It’s exploding right now. It’s been growing for many years as big players in the alpine market get into alpine touring, the growth in our state and people in general not wanting to wait in lift lines. But this year, it’s blowing up.”

But he’s not up 50% over all of last season, as NPD shows for alpine touring equipment.

Stenclik thinks a big part of the tremendous growth comes from storeowners venturing into the backcountry market for the first time. Maybe they already have accounts with big brands, like Salomon, Jones, K2 and Marker, and this summer, after watching the spring surge, they ordered those brands’ backcountry offerings.

“I think a lot of shops that have never carried alpine touring stuff are adding it now,” Stenclik said. “So I think collectively a lot of the non-specialty shops are maybe moving that needle.”

Stenclik has a warehouse loaded with nothing but backcountry ski and snowboard equipment. So Cripple Creek has been able to weather the sudden demand that has reduced the flow of gear from manufacturers to a mere trickle.

As skins and other accessories become more scarce, Stenclik said nearby retailers have been ordering from his stash.

“Other shops are coming in and buying retail just to be able to get their buyers all the way there,” he said. “That says a lot about the scarcity right now.”

Stenclik has a big collection of bindings for splitboards in his warehouse, which are exceptionally rare right now. He’s only selling those to buyers who are also picking up a splitboard, though. So he’s pulled down the “buy now” buttons on his website for those bindings.

“We do feel a bit of commitment to the touring community. We are not doing what is quickest to make a buck and we want to get someone responsibly set up,” he said. “We want people to have the right equipment and the avalanche gear to go out and have fun and be safe.”

Down in Denver at Jon Kahn’s Confluence Kayaks outdoor store, sales of alpine touring and avalanche safety gear mirror the NPD numbers. And he too is struggling to find splitboard bindings, as well as ski boots made for touring.

“Definitely having availability issues,” Kahn said. “Overall, I feel incredibly lucky to be in a business segment that seems to be boosted by the pandemic. We are going to work every day hoping that hand washing, masks, and sanitation theater is good enough.”

Boulder’s Backcountry Access, which makes the wildly popular Tracker beacons and Float airbag packs, has seen sales climb 25% over this time last year, which compares to an average of 10% growth over the venerable brand’s history.

“Now we’re worried about being so low on inventory after New Year’s we won’t be able to meet our Q1 and Q2 goals,” said Bruce Edgerly, the co-founder and vice president of Backcountry Access.

Edgerly said he has seen a “a ton” of mainstream ski shops dabbling in backcountry sales this winter for the first time this season. Also, shops that canceled orders in the spring as they shut down during the first months of the pandemic are bouncing back with extra-large orders for this winter, he said.

“We slashed our budgets by 20% across the board last spring when the shutdown happened,” he said. “Now we’re wondering why.”

The boom in backcountry sales has driven a focus on avalanche education as search-and-rescue teams across the West brace for a surge of newcomers stomping into avalanche terrain as resorts limit capacities with reservations. An alphabet soup of Colorado agencies, led by the state tourism office, last week launched a winter-long campaign urging Coloradans to plan ahead and show respect for the state’s backcountry, where an average of six skiers, climbers and snowmobilers a year have died in avalanches over the last 11 seasons.

Across the state, avalanche educators have created pandemic-friendly online avalanche education programs to accommodate the growing demand. Even gear makers are getting into the education game, with Salomon this week launching a 10-part online video series on avalanche safety. Friends of Berthoud Pass has an online avalanche awareness program — which is provided free of charge — that allows students to interact with instructors and participate using their phones. More than 300 skiers and snowboarders have come through the first eight classes, said Brian Pollack, the group’s director of education.

“There was the thought that we would see larger numbers this year with accessibility being easier via virtual classrooms and people’s social lives being slower due to the pandemic,” he said. “We might see a bump coming up as so many Colorado resorts are switching to the reservation system.”