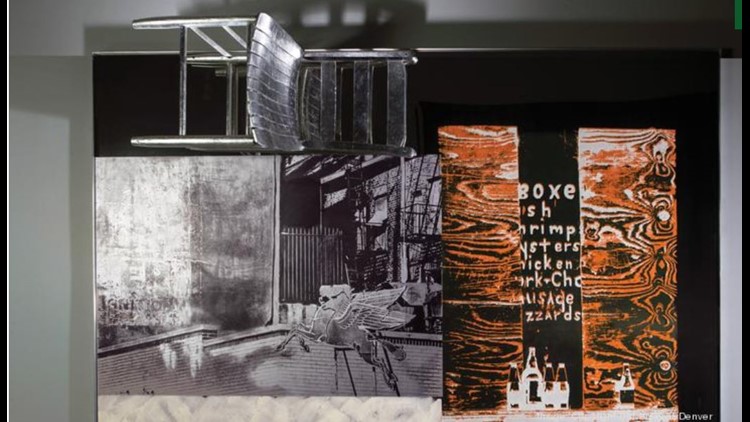 Photo by: PHOTO: WILLIAM O’CONNOR, COURTESY OF THE MADDEN COLLECTION AT THE UNIVERSITY OF DENVER
John Madden purchased Robert Rauschenberg’s mixed-media Pegasits when he lived near the artist in Florida.

DENVER — The Museum of Outdoor Arts is preparing its indoor galleries for the installation of more than 50 works by Robert Rauschenberg, one of the most influential figures in American art history. Colorado’s first solo exhibition of the revolutionary pop artist is titled “Rauschenberg: Reflections and Ruminations,” and will open to the public from Feb. 24 to June 13 at MOA in Englewood Civic Center.

For MOA founder and CEO Cynthia Madden Leitner, the exhibition manifests her long-held dream. Leitner’s interest in Rauschenberg began in 1997 when she met the artist who then lived near her parents on Captiva Island, Florida.

Leitner subsequently studied Rauschenberg’s mixed-media art and his colorful career every chance she could, including travels to his retrospective at The Guggenheim in New York City in 1998, and his silkscreen exhibit with Andy Warhol in Venice, Italy, in 2017.

“We’re not taking it lightly how famous and significant Rauschenberg was in his lifetime,” Leitner said. “Most artists don’t ever realize such success.”

The MOA show will include paintings, photographs, prints and Rauschenberg’s famous mixed-media “combines” created between 1962 and 2008, the year of Rauschenberg’s death. Leitner emphasized Rauschenberg as an avant-garde artist — a creator of many firsts.

John Madden purchased Robert Rauschenberg’s mixed-media Pegasits when he lived near the artist in Florida.
PHOTO: WILLIAM O’CONNOR, COURTESY OF THE MADDEN COLLECTION AT THE UNIVERSITY OF DENVER