Family held at gunpoint in Aurora sues, lawsuit is first to use new police accountability bill

The lawsuit was filed against the City of Aurora, the five officers involved and Aurora Police Chief Vanessa Wilson. 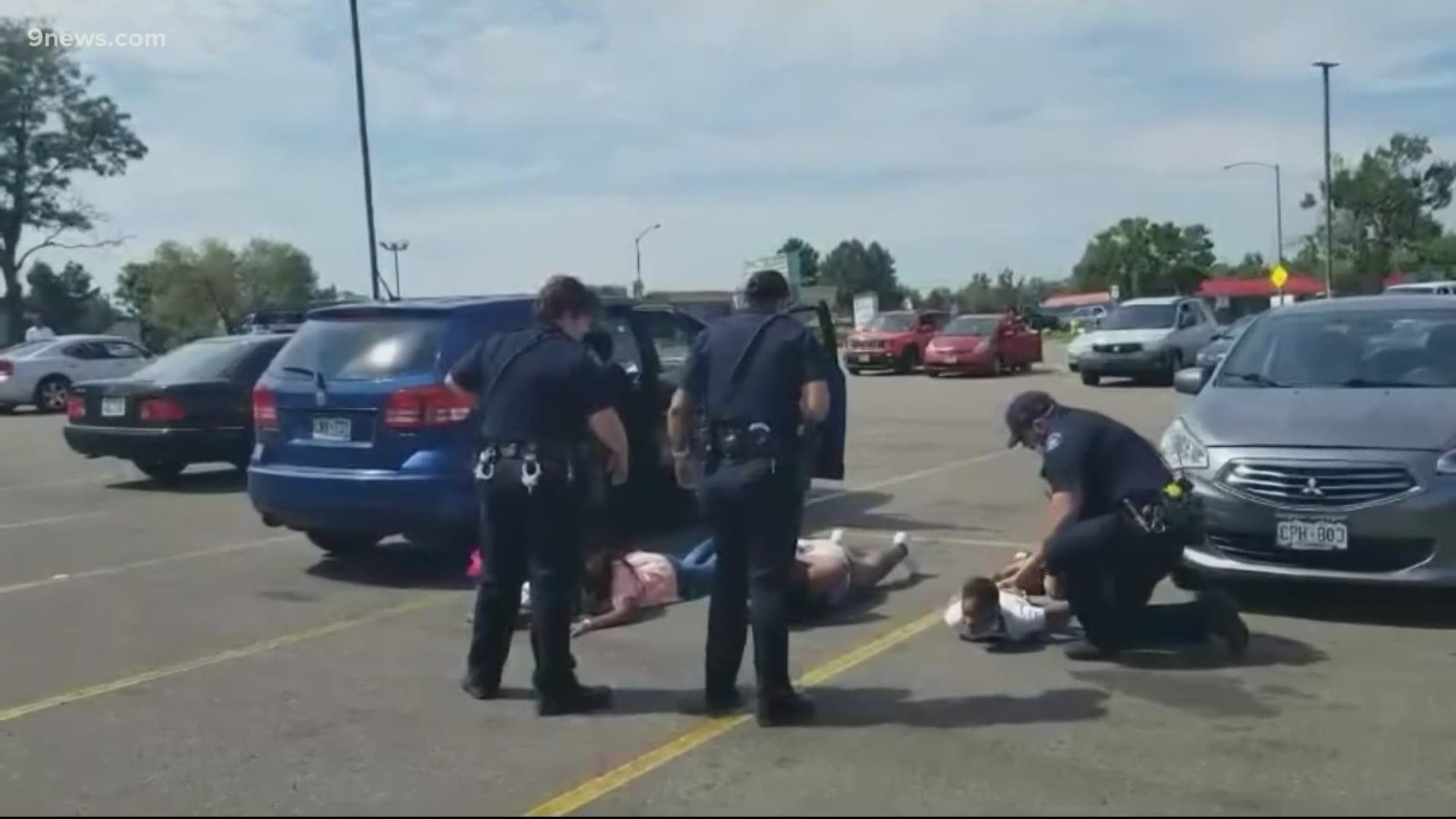 AURORA, Colo. — A Black family, including a six-year-old child, that was held at gunpoint while mistakenly detained by police in August, filed a lawsuit in Arapahoe District Court on Monday.

The suit was filed by the driver of a mistaken stolen car, Brittney Gilliam, and four minor girls against the City of Aurora, the five Aurora Police (APD) officers involved and Aurora Police Chief Vanessa Wilson.

The lawsuit comes just a few weeks after the 18th Judicial District Attorney's office declined to file charges against the APD officers involved.

“This is the first time the civil rights law that just went into effect in Colorado on July 1 has ever been used in state court," said Gilliam's attorney, David Lane.

In the past, Lane said a lawsuit like this, that accuses Aurora police and the city of violating a Black family's constitutional rights, would have been filed in federal court.

But, Lane said the state's new police accountability law, Senate Bill 20-217, has even more protections, like not allowing government officials to use qualified immunity as a defense.

That means even if there's no clear law the officers violated, the case can proceed and could set a new precedent.

Back in August, Gilliam and the children told 9NEWS they had gone to get manicures, but the nail salon was closed. According to the family, while sitting in the SUV looking for another salon, Aurora police officers pulled up and ordered the family out of the SUV at gunpoint.

Witness video shows officers ordered the family to the ground face-down and handcuffed three of them. The complaint filed on Monday says the family was detained and searched without "probable cause or reasonable suspicion."

The lawsuit claims at least a dozen Aurora officers came to the parking lot as a group of around 15 onlookers had gathered.

Ryan Luby, a spokesperson with the City of Aurora, issued a statement Monday afternoon: "The city has not been served with Ms. Gilliam’s lawsuit and it would be improper for us to comment on pending litigation."

City leadership and Aurora Police Chief Vanessa Wilson have previously expressed that this incident is not reflective of their expectations for the APD.

Chief Wilson has apologized to Ms. Gilliam directly and offered to cover the cost of providing age-appropriate therapy to the children involved. Though the officers followed protocol and adhered to their training at the time of the incident, Chief Wilson and city leadership recognized officers need to have discretion and the ability to deviate from that process when different scenarios present themselves.

APD has since adjusted its training practices by allowing officers to have more discretion when contacting suspected stolen vehicles.

The City of Aurora is committed to ongoing reviews of the practices and procedures of the APD. City leadership and APD command staff have undertaken a plan to restore public trust in the department, called “A New Way.” The plan encourages residents to continue to provide feedback. As such, it is a living document and will be updated periodically.

The 18th Judicial District Attorney’s Office reviewed the incident involving Ms. Gilliam and her family and, earlier this month, declined to file charges against any of the involved officers."

Gilliam and all four of the children have suffered severe distress because of the incident, the suit claims.

The children struggle to sleep and eat, and all are in therapy to help them deal with what happened that day, the suit says.

The lawsuit, which is 42 pages long, references previous incidences between Black people and Aurora Police. The suit claims the department has a history of excessive force and racial profiling against Black people.

The lawsuit asks for claims for relief related to unlawful seizure, unlawful search, excessive force and denial of equal protection.

The lawsuit requests that the plaintiffs receive punitive and compensatory damages.