A now-retracted article contained dubious suggestions that a postcard had invited voter fraud. Though the story is gone, Rep. Ken Buck called for an investigation. 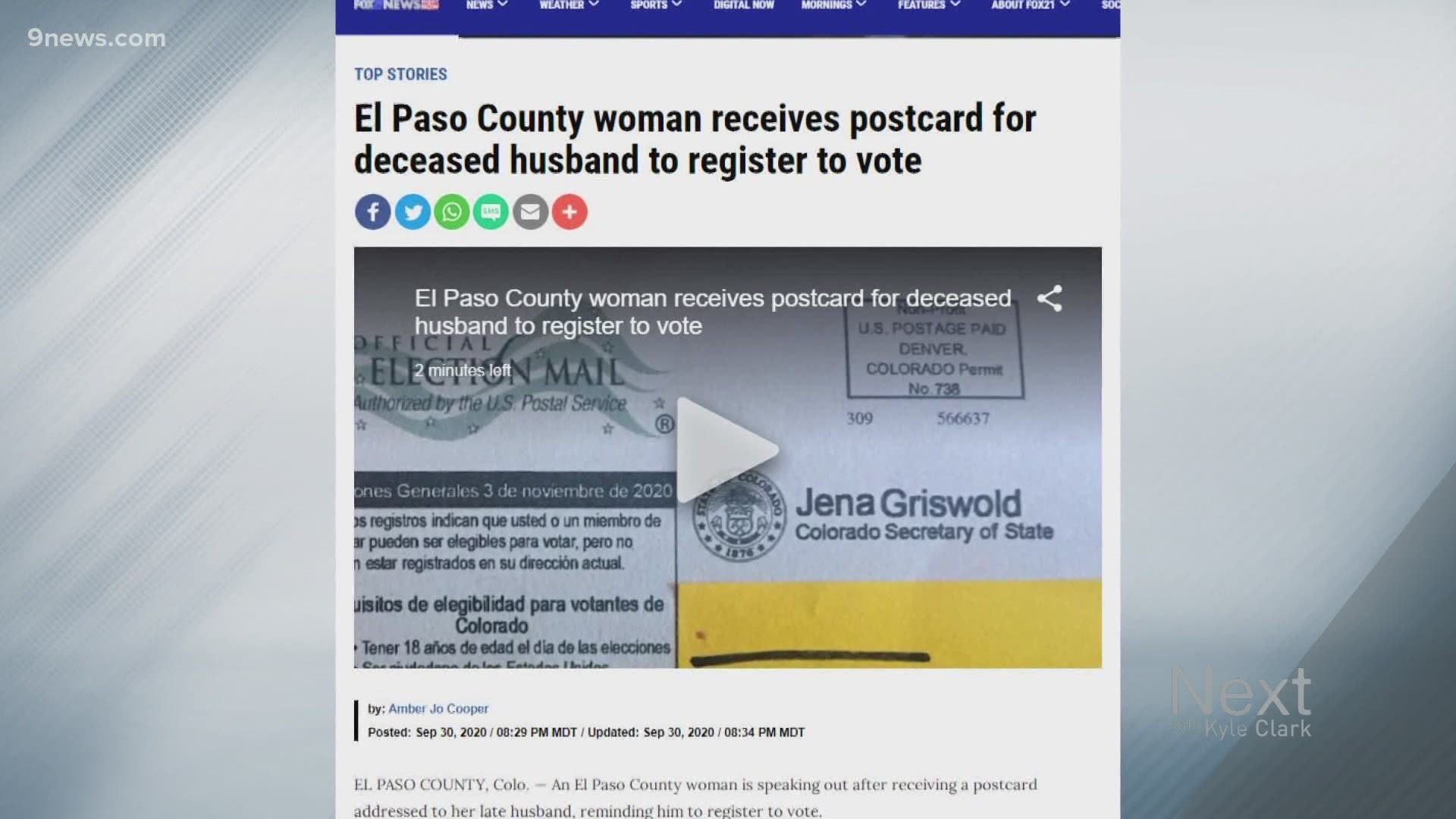 DENVER — A retracted story from a local Denver TV station has led to the spread of misinformation about Colorado’s election security, and now has the leader of the state Republican party asking the federal government to investigate.

Rep. Ken Buck called on the Justice Department to investigate postcards sent by the Colorado Secretary of State that encouraged unregistered voters to register, after at least two news outlets in the state reported about ineligible voters receiving the postcards.

KCNC, Denver’s CBS affiliate, retracted a story on the postcards in late September, after the Colorado Secretary of State explained the mailing list for the postcards was different than the voter roll for the state. The Fox affiliate in Colorado Springs covered a story about a woman receiving a postcard addressed to her dead husband. Even after the decision by KCNC to retract the story, the Fox station’s version remains online.

Colorado’s voter registration verification system is robust, according to Weld County Clerk Carly Koppes, a Republican. Koppes said clerks have links to the state’s driver's license database and a Social Security database and verify all new voters’ identification through that system.

To keep the voter rolls clean, Koppes said her office and other local clerks receive a list of deaths from the Colorado Department of Public Health and Environment and runs it against the current voter list at least twice a month.

“We do that year-round,” Koppes said. “With all the list maintenance we do year-round, that is how we know that our address library is correct, our voter rolls are correct.”

“We have such a strong system here in Colorado that it would be very very difficult for someone to attempt to do that.”

The clean voter roll allows county clerks to ensure they are mailing ballots only to active voters, she said. Should someone somehow receive a ballot that isn’t theirs and try to fill it out, signature verification would catch them.

Bi-partisan judges review signatures for each ballot and can either accept or reject them. If the signature is rejected, the voter is contacted and can cure the ballot for up to eight days after Election Day. If the voter does not cure the signature, Koppes said clerks forward the questionable signatures to the district attorney for further investigation.

In 2016, Weld County forwarded 372 signatures to the D.A. for voter fraud investigation, according to Koppes. The Weld County District attorney ended up prosecuting one case against a man, the former head of Colorado’s Republican Party, who filled out and signed his ex-wife’s ballot.

Koppes said her office receives phone calls from voters concerned about election security each year. This year, she said quite a few people have already called.

“[County clerks] kind of ignore the politicization of elections and we concentrate on making sure we get that information out there that’s correct and factual,” Koppes said.