Two PSAs in Colorado will focus on keeping guns secured in a safe to keep them out of the hands of teens, and to keep them from being stolen. 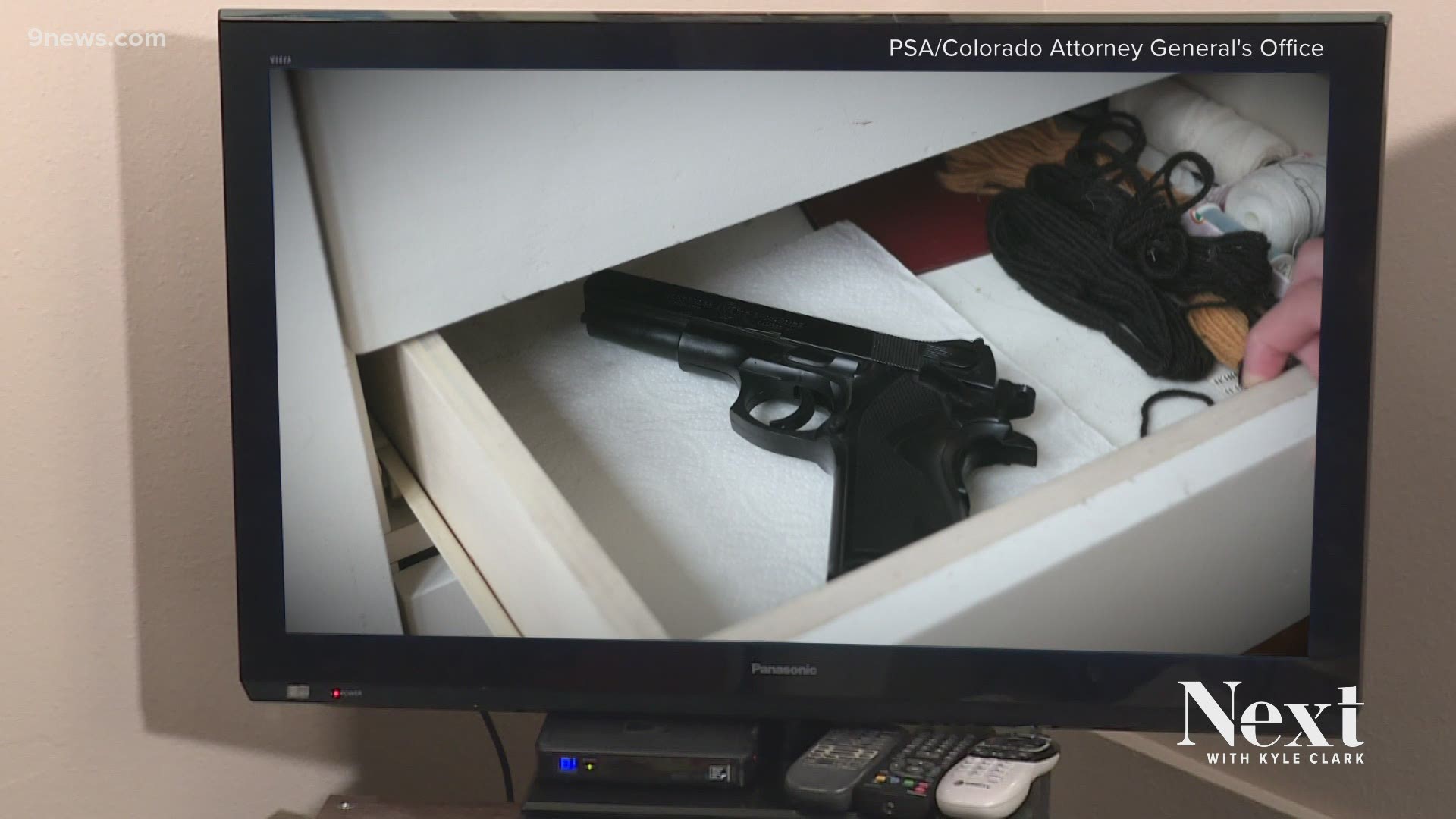 DENVER — Public service announcements (PSA) used to use gimmicks to get a message across.

Crash test dummies were used to get people to buckle up. Cracking an egg into a frying pan illustrated a person's brains on drugs.

Colorado's Democratic Attorney General is not taking such a cute approach on a new PSA campaign on the topic of safe gun storage.

"The fact remains the number one cause of death of our young people 12-24 years old is suicide, and the number one way people die is with a firearm, often procured from a family member or friend when it's not secured," said Attorney General Phil Weiser.

Two PSAs will start airing on Monday on TV, social media and on the radio.

They focus on keeping guns secured in a safe to keep them out of the hands of teens and to keep them from being stolen out of homes and vehicles.

"Part of the challenge is a culture challenge. The culture is 'my firearm is dangerous, if I'm not responsible, someone else may use it in a tragic way.' That's a culture shift," said Weiser.

The Colorado Department of Public Health and Environment keeps statistics on deaths in the state. The interactive vital statistics website breaks down the data by county, by age and other metrics.

"The goal here is about educating owners of firearms about what responsible gun ownership entails."

"The campaign actually started, originally, in Larimer County at the behest of our [District Attorney's] Office," said Larimer County Sheriff Justin Smith. "We were looking at any avoidable injuries, deaths and criminal use of firearms."

Guns stolen from homes and vehicles have increased in Aurora and Denver over the last two years.

"I, personally, have a vault that goes into my console of my personal vehicle, that it locks in. I realize not everybody has that option, but there's other locking mechanisms; steel cases that can go in that makes it a lot more difficult," said Smith. "There's $20 or $30 solutions of putting that firearm in a case when you're out of the vehicle."

Separate from the PSAs, state lawmakers will consider a bill that would create a crime for not safely storing a firearm.

"Most gun owners, I’m a gun owner myself, are responsible gun owners. They store their guns properly. This [bill], kind of, outlines storage for those who aren't really using it or haven't thought about it," said State Rep. Monica Duran (D-Wheat Ridge).

Duran and Rep. Kyle Mullica (D-Northglenn) are both sponsoring the bill again this year.

It was introduced just before the pandemic started last year, but never got anywhere when the legislature limited its session.

"The main point of this bill is the education and getting everyone used to storing their guns in a safe manner to save lives. It's really all about saving lives," said Duran. "It's really preventing suicide, saving lives and really educating the public on why it's important to properly store your gun."

The bill will still create a misdemeanor crime for someone who does not store their firearm safely, and knows, or should know, that a teen can get access to the firearm without seeking permission.

"Our take of working on this PSA was to recognize there's common ground of ways that we can secure firearms to prevent these things without creating new criminal sanctions," said Smith.

Duran and Mullica said they have both talked with the National Rifle Association and Rocky Mountain Gun Owners to craft the bill in a way that focuses on gun safety.

“RMGO does not in any way endorse the efforts to force gun owners to make their firearms useless in a self defense situation. Any attempt by the sponsors to spin this kind of legislation as 'gun owner endorsed' is frankly laughable,” said Rocky Mountain Gun Owners Executive Director Taylor Rhodes.

RELATED: NRA filing for bankruptcy, plans to reincorporate in Texas