How Officer Gordon Beesley made his mark on Colorado's music scene

From the stage to the classroom, Beesley will also be remembered for his musical talent and how he used it to connect with so many people. 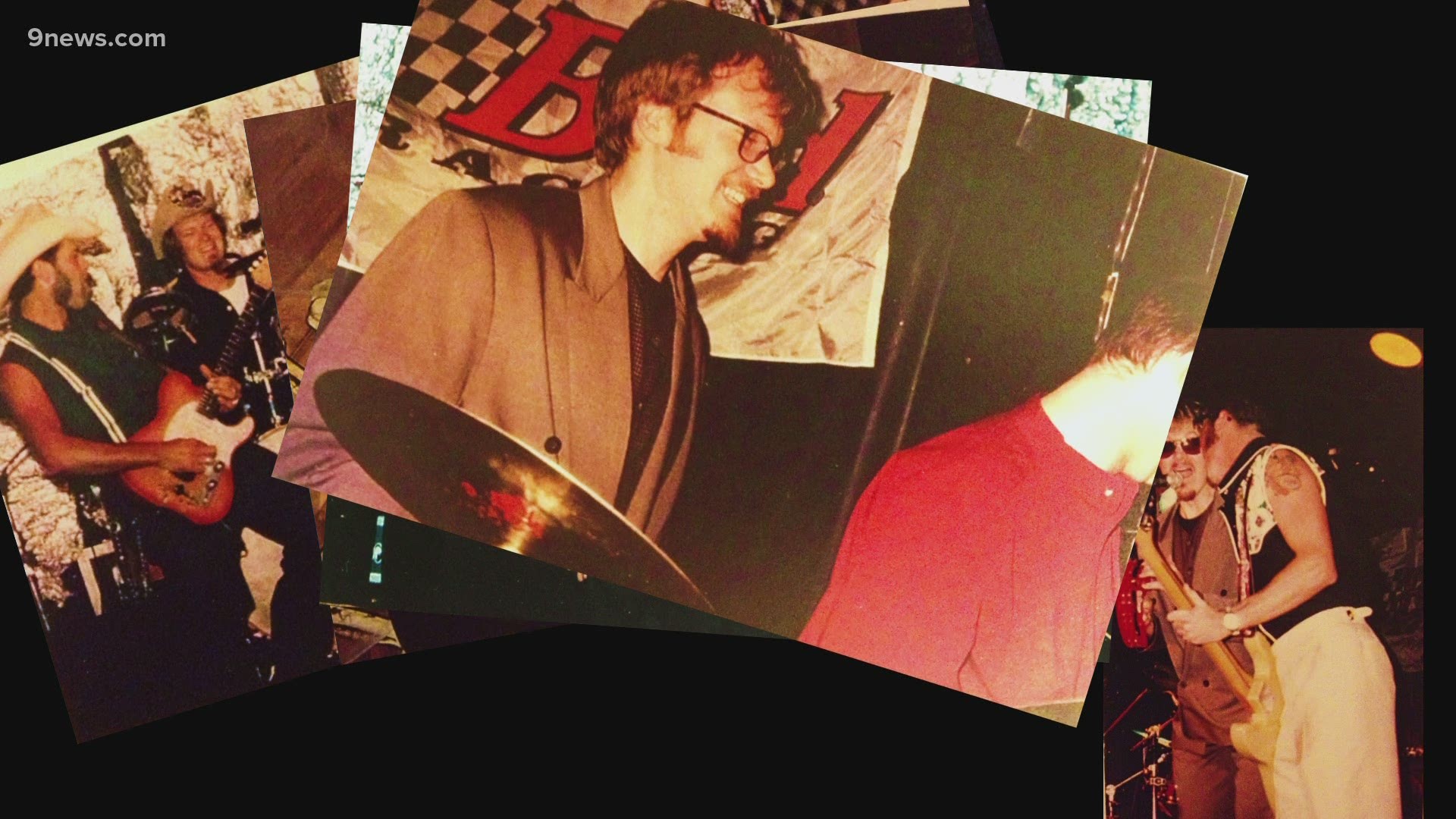 COLORADO, USA — Sitting in front of a drum set and next to a coat that reads the band name, "Brethren Fast," Nathan Nicholson reflects on his time playing alongside his friend and former band mate, Arvada Police Officer Gordon Beesley.

"He was a great drummer, had a great drum kit," Nicholson said. "He was very organized, had his own method and he always had a smile on his face. He's back there just having the time of his life."

Beesley and 40-year-old John Hurley, who was identified as a good Samaritan by Arvada police, were killed in a shooting in Olde Town on Monday afternoon.

A growing memorial outside of Arvada City Hall includes a few drum sticks, and that's because Beesley was well known not only as a devoted School Resource Officer and police officer, but also a talented musician.

From the stage to the classroom, friends that knew Beesley say he will also be remembered for using that talent to connect with so many people.

Credit: Austyn Knox
A pair of drum sticks sit at the growing memorial for Officer Gordon Beesley, outside of Arvada City Hall.

Nicholson said he knew Beesley in 1995 and beyond, staying in touch over the years.

He explained how when he met Beesley, he looked up to him.

"I played the drums when I met him, yeah. I was a drummer," he said. "I played in a band and started kind of taking notes from him because he played in a bigger band."

He later told the story of how Beesley let Nicholson take over as drummer when Beesley left the band to pursue his other career.

"He loved people," he said. "To him, music was like a communion. It was a way to bring people together and have a good time. He just had a huge heart. He loved his community. He loved his band mates. You know, we lost Gordon yesterday. We lost a brother. We lost a family member."

He added that he believes Beesley treated music as more than just playing an instrument.

"I think he definitely understood the power of music, bringing people together," Nicholson said. "People are laughing, they're having a good time and just being people, you know. And so the guy he just, like I said, he had a big heart man."

But overall, Nicholson's message is to have more people be like Gordon Beesley.

"Well, he's a hero number one," he said. "We need more people like him in this world."

Not just one band

Beesley also played for several other bands, including the Railbenders.

In a statement from band members and management, they tell 9NEWS:

“We are utterly devastated by the loss of our brother Gordon Beesley. Gordon was a founding member of our band and played on our debut record.  He was a tremendous talent and performer.  More importantly, he was a great friend.  He was a gentle giant.  He was the nicest guy you could ever know.  Everyone who met him knows all of this already.  We could go on and on.  The truth is: there are not enough words in the English language to adequately describe the amazing human being Gordon was.  He was truly a light in our city and now there is a heavy darkness felt in his absence.  Our hearts are especially with his wife and two boys at this time. We love you brother Gordon. See you on the other side.

In a Facebook post Kyle Hollingsworth, who is currently a keyboardist for The String Cheese Incident wrote in part, "He was a great man; gentle, kind and funny ... I spent a lot of my first years here in Colorado with him creating and playing music. I will miss him dearly...Make sure to hug everyone you love everyday."

Hollingsworth talked to 9NEWS Tuesday knowing Beesley in the 90s, and played together in the band, DURT.

"Everybody has their own musical personalities," Hollingsworth said. "You bring what you want to bring to the table, as far as an attitude or expectation, and I always felt like he was open for what other people were bringing in. He grew up to be such a generous person and such an open hearted person. Not that he wasn't when he was younger, but you see people that mature and bring that to the community."

Bringing music to the classroom

Even after Beesley left the bands behind to pursue a career as a police officer, it didn't stop him from continuing to play music.

Proof of that is a video that resurfaced on Facebook from Three Creeks School Spanish teacher, Becky Loftus.

The video shows Beesley playing the guitar with a santa hat on, and teaching kids to sing the words to the Christmas song, "Feliz Navidad."

"Officer Beesley used to come to my classroom every year at Christmas time and sing that song, he made an amazing connection with all of our students," Loftus said.

She explained that the tradition originally started at Oberon Middle School, where she used to teach.

However, Beesley would show up to Three Creeks School to continue playing Loftus' classes.

"He always found good in everyone and always wanted to bring out the good in everyone," Loftus said. "He wanted to see kids smiling and having a good time. He always helped us achieve that by singing in our classrooms or being so approachable in the hallways. I think that when you connect through music and with music, that you also are creating a memory, and I know so many students at Oberon Middle School and now one class at Three Creeks that will never forget Gordon Beesley singing Feliz Navidad."

Loftus knew Beesley for about 15 years, and says he will be dearly missed.

"Officer Beesley really cared about all of your children," she said "That's what I would remember the most, because I love the children, too. Yeah, he really cared."

Arvada police said the only official donation site is the Colorado Fallen Heroes Foundation. The foundation said all donations received in the next month will be given to Beesley's family. After that time period, donors may specify that their gift is intended for the Beesley family, according to the Jefferson County Sheriff's Office.