A member of Rep. Steve Lebsock’s (D-Thornton) own party is drafting legislation to kick him out of the Colorado House of Representatives after multiple women accused him of sexual harassment. 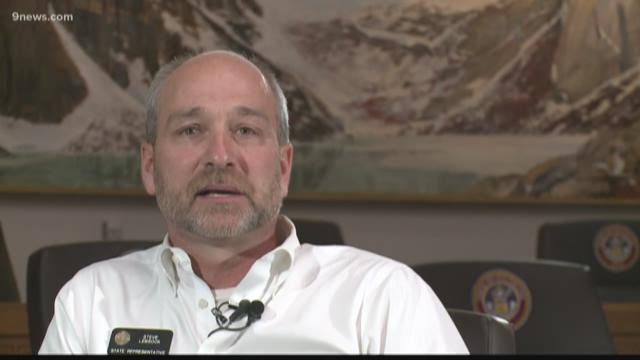 DENVER-- A member of Rep. Steve Lebsock’s (D-Thornton) own party is drafting legislation to kick him out of the Colorado House of Representatives after multiple women accused him of sexual harassment.

“At this point I have enough information, and I’ve seen enough information to know that I don’t believe that any woman who wants to participate in the lawmaking process in Colorado should have to interact with Steve Lebsock,” Rep. Matt Gray (D-Broomfield) told 9NEWS.

Lebsock was accused by another member of his party, Rep. Faith Winter (D-Westminster), of turning aggressive after she refused to go home with him during a party celebrating the end of the 2016 legislative session. Multiple unnamed female lobbyists also told radio station KUNC they’d debated filing formal complaints about Lebsock’s behavior but worried it would negatively impact their careers.

Lebsock, who is also running for state treasurer, calls the allegations "false" and says he won’t resign. He claims, in part, that there is pressure to believe Winter’s account because she is running for a contested Colorado state senate seat in 2018.

When asked about Gray’s plan to expel him, Lebsock said by text message, “I’m looking forward to that vote after my side of the story, the truth, comes out.”

Kicking Lebsock out of the legislature would be a simple – albeit rarely used -- process, according to a memo Gray requested from the Office of Legislative Legal Services. It’s only happened once in Colorado’s history, more than a century ago.

Colorado's constitution requires a two-thirds vote of either chamber to expel a member.

On Thursday, Gray asked staffers to draft a resolution to do that, saying he wants the House to expel Lebsock on “day one.”

Gray knows the people of Lebsock’s district could recall him, but he said that process is long and expensive.

“I think that time is of the essence here,” Gray said. “I don’t think taxpayers should have to pay for an election to hold Rep. Lebsock accountable when members of the general assembly are perfectly capable of holding him accountable ourselves.”

Only one state lawmaker has ever been expelled in Colorado History. The House booted Rep. William Howland (R-Denver) for perjury in 1915 after he gave two different stories under oath about a package of money he accepted, which some suspected to be a bribe.

When the 2018 session begins in January, Gray’s resolution would have to go through the normal process and be brought to the floor for a vote by the Speaker of the House.

"I would hope that such a step will not be necessary," Speaker Crisanta Duran told 9NEWS. "And that Rep. Lebsock will have a change of heart and do the right thing and resign."

Formal complaints have been filed against Lebsock -- a process that begins in the speaker's office.

Gray, who also hopes Lebsock will resign, said the findings of that investigation could inform how members vote on expulsion.

Republicans in the Colorado House want an independent investigation into how Democrats in general and Duran in particular handled Winter’s claims.

Winter complained in the spring of 2016, and Duran made Lebsock chairman of the Local Government committee for the 2017 session.

“When I named Rep. Lebsock to the chairmanship, I believed that the situation had been resolved to the satisfaction of Rep. Winter,” Duran said in a statement issued earlier this month. “When these new allegations came to light last week, I took action to address them. I would not have appointed him chair knowing what I know today.”

Gray didn’t knock Duran for how she handled the accusation back in 2016, saying it should always have been Winter’s decision whether to make the allegations public.

He added that the Colorado Legislature in general hasn’t done enough to protect women who work there.

“We have not created a safe place for people to work, and I want to say I’m sorry,” Gray said.

That’s part of the reason why he wants the House to give Lebsock the boot.

“We need to not just say it’s unacceptable. We need to follow through with actions,” Gray said.
“And so, when these types of acts are committed, whether it’s in the House or the Senate, we need real accountability for them not just proclamations that we wish there was a better way.”

Nov. 14, 2017 | Colorado House Speaker on why she promoted Lebsock, despite allegations

Nov. 29, 2017 | Colorado State Rep. Lebsock does not plan to resign after harassment allegations

EDITOR'S NOTE: This story has been updated to accurately reflect the formal complaint process for the Colorado House of Representatives.