For the first time this season, Rosalind Lewis, Battey's mother, finally got to see CU’s heart and soul play in person again. 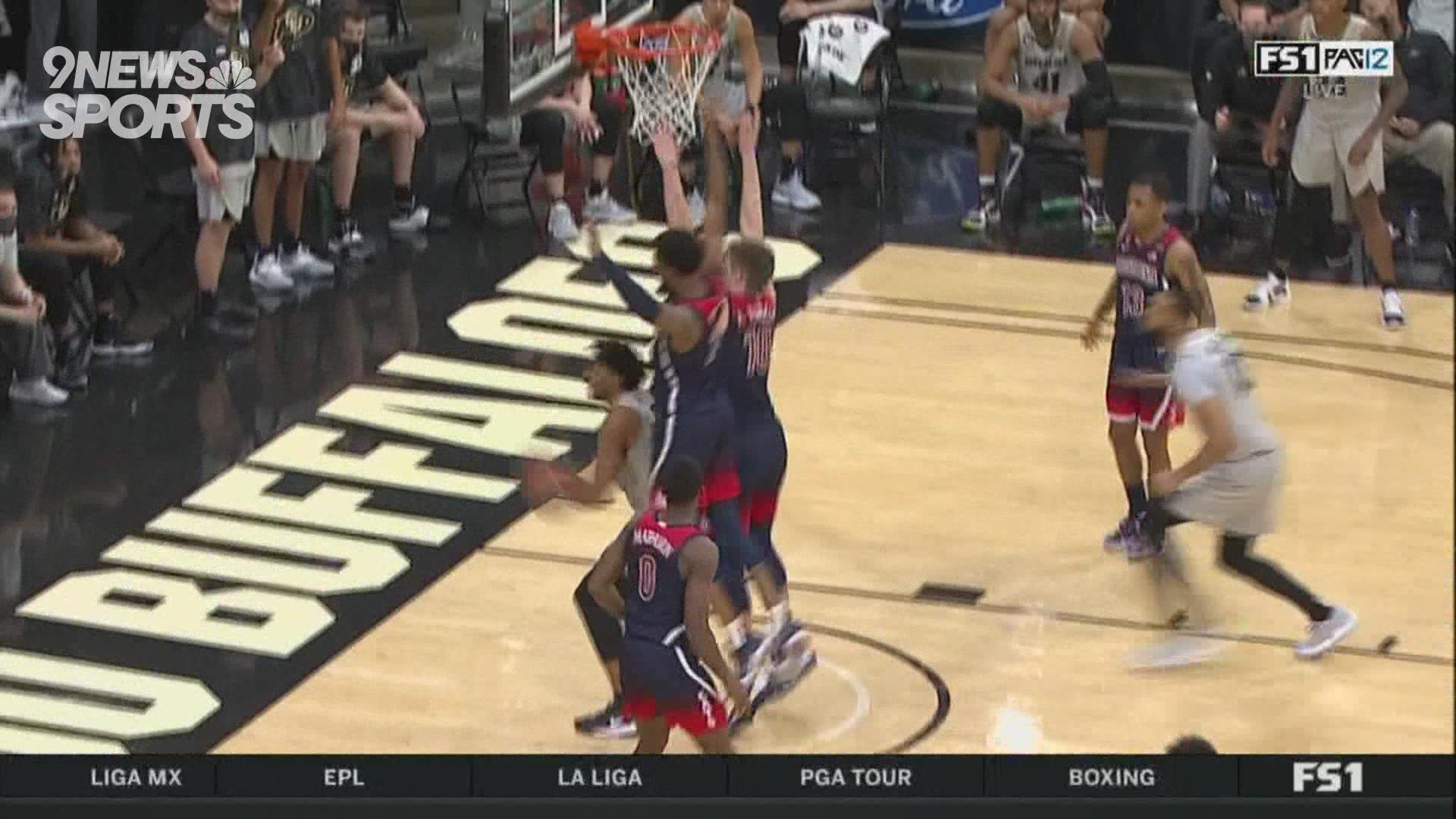 BOULDER, Colo. — If you watch CU Buffs basketball, you know that junior forward Evan Battey is the heart and soul of the team.

The 6-foot-8 junior from View Park, California is averaging 11 points and six rebounds per game, but it’s his energy and passion for the game that comes right through the screen.

For the first time this season, Rosalind Lewis, Battey's mother, finally got to see CU’s heart and soul play in person.

“I’m glad I could be here,” said Lewis on Monday night to 9NEWS. “Grateful I could be here. My daughter was with me the other night. We had a great time and it’s just wonderful.”

Colorado has allowed around 100 player guests to attend the Buffs recent home game, giving Lewis a chance to watch Battey be Battey. Lewis was in attendance for both games in Boulder against Arizona and Oregon State.

“Yes he’s a very emotional kid. When he gets emotional, that’s when you really better be watching out because he plays best," Lewis said.

And when asked what’s it like to watch her son play?

“It’s just joy, because we’ve had so many bumps and hurdles along the way," Lewis said.

Some of those hurdles include Battey suffering a stroke and two seizures after playing in a pick-up basketball game during his freshman season while he was sitting out due to academic reasons.

The road to recovery has not been easy, but nevertheless, Battey is starting and contributing for a potential NCAA tournament team.

On Saturday against Arizona, Battey rolled his ankle late in the second half of a close game. He got up and hit two clutch free throws with his mom watching, pom poms (you know, the ones that cheerleaders use) in hand.

“When he went and made those big free throws, I was like that’s just typical him. He got the T-shirt in his teeth and he’s crying, I’m like okay, can you be any more emotional and play basketball? It’s killing me!" Lewis said.

It was not until after the game when Battey showed real, raw emotion.

Emotion not connected with pain from an injury, but from love for his family who was there to see him play.

“It meant the world, honesty,” Battey said while talking to the media in his postgame press conference as he teared up. “My mom loves watching me play. My sister, it just meant the world. There’s no words to explain that feeling.”

Lewis said she had trouble watching the press conference from the car, holding back her own tears.

“It’s always been something that’s emotional for me to be there with him. It’s just the energy and a bond that we have. He’s my rock. I always can come to him and he grounds me and he makes me remember who I am, really," Lewis said.

“He’s got that natural born leader inside of him. I love seeing him when he takes that and goes," she continued.

It is obvious that Battey's mom loves to watch her son play, but she says that when they’re home, when they’re away from the game, she is the last person to talk hoops with him.

During this crazy COVID-19 college basketball season, Lewis is just happy to be able to watch her son play again.

“I’m very proud of who Evan is, and (who he) is becoming and has shown here," Lewis concluded.