Colorado's Independent Ethics Commission looked at who paid for Hickenlooper to travel around America and to the Bildenberg Meeting in Italy.

DENVER — Colorado’s Independent Ethics Commission released its report Thursday on ethics complaints made against former Governor John Hickenlooper, who is accused of violating state ethics rules during trips he made in 2018.

The commission, which has not yet ruled on whether there was any wrongdoing, interviewed multiple people, including Hickenlooper. Their report is mostly a summary of the interviews along with receipts and flight itineraries.

Frank McNulty, a Republican and former speaker of the House in Colorado, made the complaints regarding five separate events.

One of Hickenlooper’s disputed trips was to Turn, Italy, in June to attend the notoriously secretive Bilderberg Meeting, which is often attended by global elites including powerful politicians and business people. The New York Times reported Secretary of State Mike Pompeo, presidential adviser Jared Kushner and a former Google executive also attended this year.

The event is described as “an annual forum for informal discussions, designed to foster dialogue between Europe and North America.”

“Every year, approx. 130 political leaders and experts from industry, finance, labour, academia and the media are invited to take part in the Meeting. About two thirds of the participants come from Europe and the rest from North America; one third from politics and government and the rest from other fields. The Meeting is a forum for informal discussions about major issues,” the Bilderberg website says.

A secretary with Bilderberg said Hickenlooper was not invited to the meeting because of his duties as governor, but that he was “invited as an interesting American person.”

Hickenlooper, according to the report, said he considered the trip to be vacation time and paid his own way to the conference.

In another case, Hickenlooper was flown to Connecticut by MDC Holdings, a home building company owned by Hickenlooper's friend and donor Larry Mizel. Hickenlooper was there to attend the commissioning of the USS Colorado Navy submarine.

Hickenlooper said to investigators that he tried to pay for the flight, but the company refused.

MCD wouldn't tell the investigators whether it had business before the state at the time of the trip, which could have created a legally-prohibited conflict of interest.

Five days after the report's release, Hickenlooper sat down with Next With Kyle Clark's Marshall Zelinger and said, "My understanding was that we were doing everything that we were supposed to do, and I'm not aware of having any private business -- now, if they do have private business, that's news to me."

Hickenlooper told investigators the Connecticut trip was made in his official capacity as governor. Speaking to Zelinger, Hickenlooper said his focus was on how he was representing Colorado.

"Being able to attend the whole range of activities on behalf of the state, which everyone thought was important and important to our relations with Fort Carson and the Air Force Academy, and all northern command," he said, "How the governor, what he or she chooses to attend affects that relationship with the Pentagon  that was my focus on this wasn't you know any money that was saved was saving the state money and I didn't discuss any business."

The complaints listed in the report include a trip to Texas, where Hickenlooper officiated the wedding of Elon Musk’s brother, and a trip to Wyoming to attend Jackson Hole Symposium.

In our interview, Hickenlooper defended himself, saying he had followed the rules.

He also told Zelinger that journalists should be defending him in this case.

"You guys should be protecting me on stuff like this," he said. "Where there is no -- what's the confusion, that I had a private meeting? No, there are no private meetings. That I somehow saved money myself, I wasn't going to pay for that plane ticket - I saved the state money."

"I'll be very surprised if they come back and say this is unethical," he added.

The commission will rule on the complaints at a later date.

WATCH | Commentary: Thoughts on Hickenlooper saying journalists should protect him 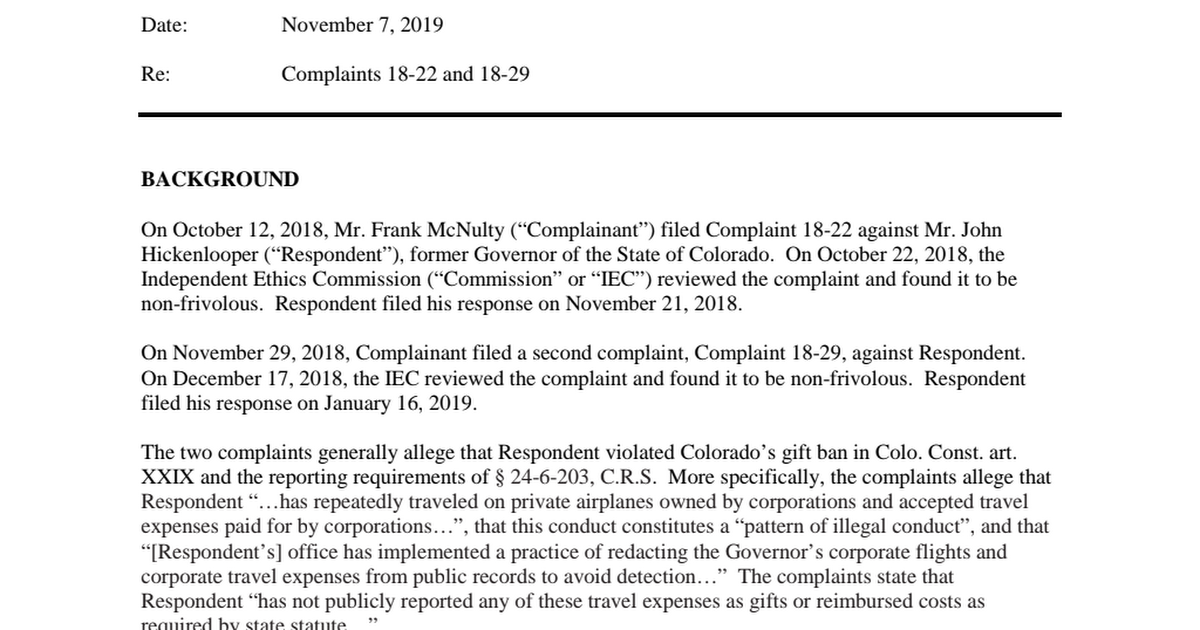