From Douglas County to the Capitol, anger over mask orders in Colorado boils over 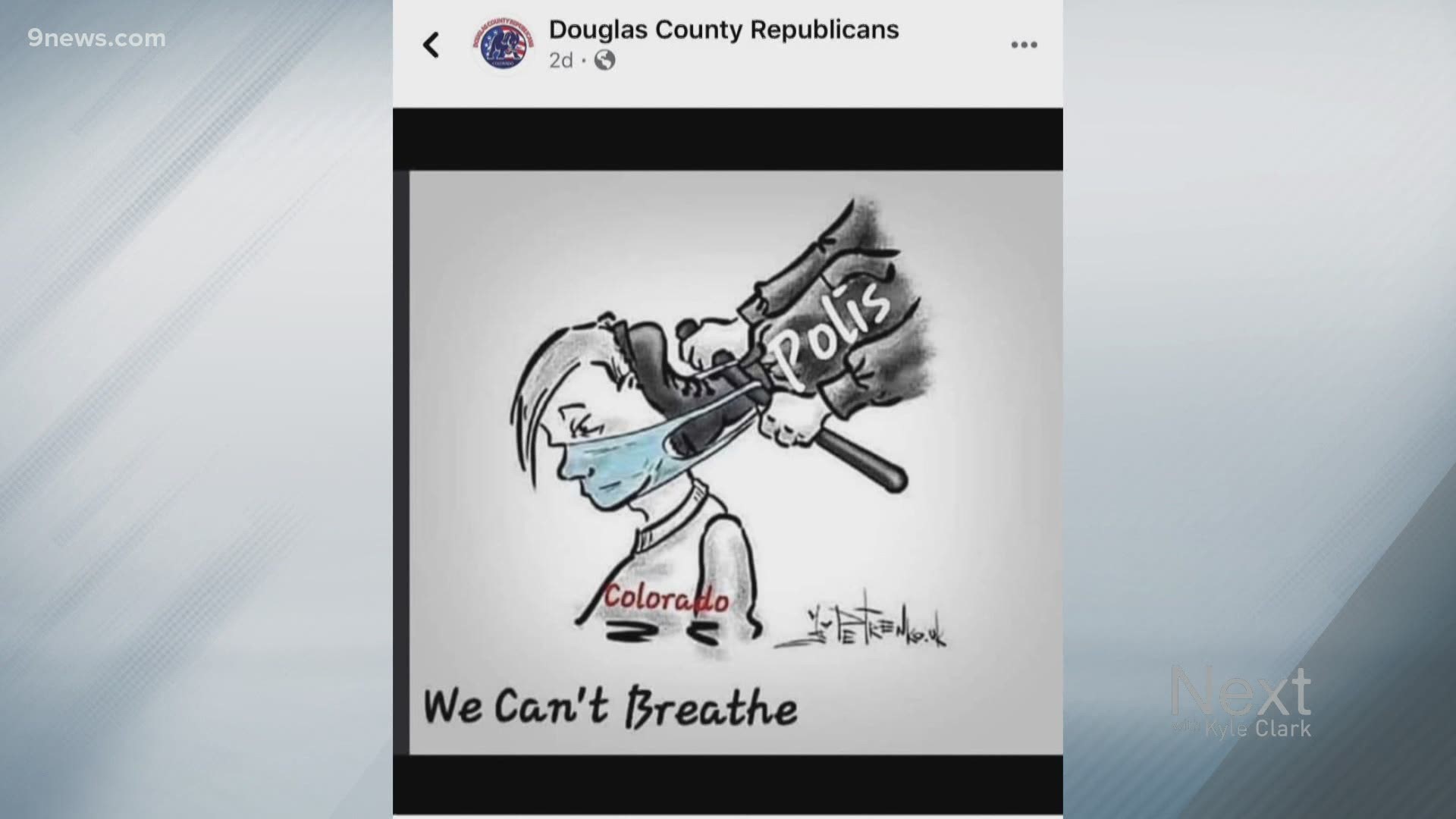 DOUGLAS COUNTY, Colo. — The Douglas County Republican Party has issued two apologies for a Facebook post depicting a cartoon police officer labeled "Polis,” who is shown stepping on the neck of a man wearing a mask -- "Polis" being Colorado’s Democratic Gov. Jared Polis.

The cartoon included the caption "We Can't Breathe," echoing the words said by George Floyd, who died in May after a Minneapolis police officer held a knee to his neck.

Stephen Allen, the Douglas County GOP chairman who runs the party's social media accounts, first apologized Monday via the Facebook page to "anyone who was offended by the post." The original statement was deleted Tuesday and replaced with a new apology that omitted those words:

A post was made on the Douglas County Republicans Facebook page on Friday morning which was subsequently taken down over the weekend.

As Chairman I am responsible for the content of our social media and I apologize for the post. We are currently reviewing our editorial policies with regard to content and access to our social media platforms.

The photo has since been removed, as well, but Douglas County’s Republican Sheriff Tony Spurlock called for whoever published it to resign.

The cartoon was posted and deleted over the weekend as Polis used his strongest language yet to condemn people who refuse to wear masks during the COVID-19 pandemic, calling them “selfish bastards” in a Facebook post of his own.

"The emerging scientific data is clear: wearing a mask doesn’t only protect others, it also significantly reduces your own risk of getting Coronavirus. So if you’re a selfish bastard and wearing a mask to protect others isn’t enough of a reason to do so, then maybe protecting yourself is?" he wrote.

When asked for comment about the post, the governor's office told Next with Kyle Clark, in part: "Given the unique challenges posed by COVID-19 nothing is off the table.”

Polis' words accompanied a link to a study from the University of California, Davis, which found face-coverings reduce risk to the mask wearer by 65%.

Colorado is not under a statewide mask order, but the governor has repeatedly urged people to wear them.

Most local agencies in the Denver metro area have implemented mask orders, including the Tri-County Health Department (TCHD). TCHD has managed Adams, Arapahoe and Douglas counties since 1965.

One day after the TCHD board voted in favor of a mask order last week, Douglas County's Republican commissioners said they would opt out of the mask order and submitted written notice to withdraw from the health department.

RELATED: Here are the Colorado cities, counties where face masks are required in essential businesses

RELATED: Why is wearing a mask such a controversial issue?

RELATED: Tri-County’s mask mandate will go into effect on July 24