This is part of a series of statewide ballot reviews called "We Don't Have To Agree, But Let's Just Vote." Today we study Prop. EE and its effect on cigarette taxes. 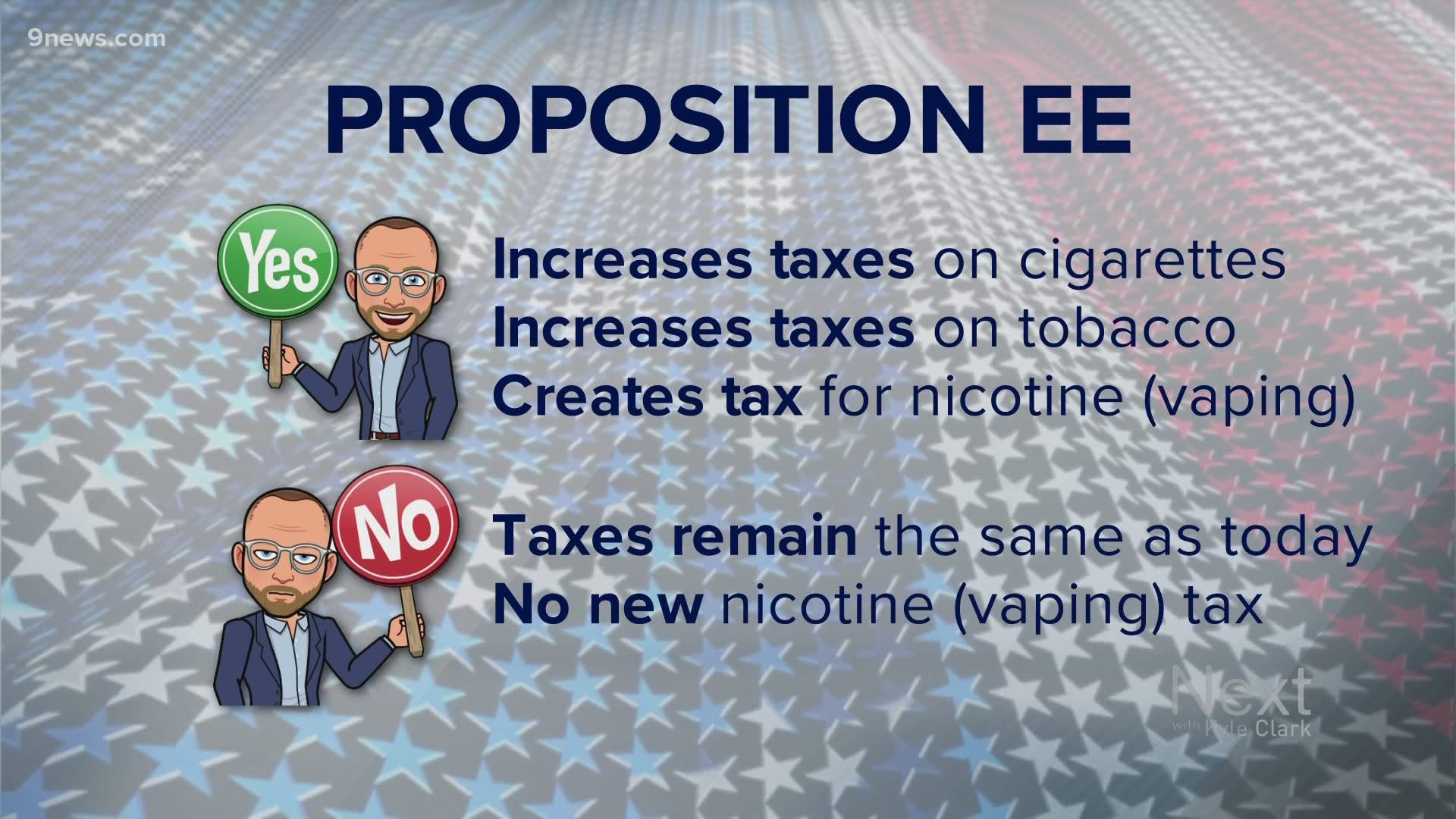 DENVER — This story is part of a series of statewide ballot issue reviews for Next with Kyle Clark we're calling "We Don't Have To Agree, But Let's Just Vote." We'll continue to look at statewide ballot initiatives on Colorado's ballot and how they would impact you.

A YES vote increases cigarette and tobacco taxes, and creates a new tax on nicotine and vaping products.

A NO vote keeps today's taxes in place, which includes no tax on nicotine and vaping products.

The ballot issue is written in all capital letters because Colorado's Taxpayer Bill of Rights (TABOR) requires tax questions to be written a certain way.

In June, state lawmakers passed House Bill 1427, which became Proposition EE. The bill was introduced on June 11 and passed by both the House and Senate by June 15. A rare number of bills each year are passed that quickly. Bills need a minimum of three days to be passed by the legislature.

Democratic Gov. Jared Polis signed the bill, but since it seeks to increase taxes, TABOR requires a vote of the people.

Currently, cigarettes are taxes at $0.84 per pack.

Here is what the tax structure would look like for cigarette packs, tobacco and nicotine/vaping products if you vote YES on Proposition EE:

If voters pass Proposition EE, lawmakers determined how it would be spent through House Bill 1427. However, future legislatures could always change how the money is spent.

For the first three years, through June 2023, the money would go to:

The money for preschool would be used to expand preschool, to provide at least 10 hours per week of free preschool for every child in their final year before kindergarten.

The health care spending would be for Medicaid, primary care, tobacco use prevention, children's health and other programs that already receive current cigarette and tobacco tax revenue.

The YES on EE campaign includes:

Campaign finance records kept by the Colorado Secretary of State's Office shows that A Brighter, Healthier Future for Kids has received more than $3.5 million in contributions as of Oct. 12.:

The No on EE campaign has produced billboards that mention a tax hike, but none of the billboards reference cigarettes, tobacco or nicotine.

The group behind the No campaign is "A Bad Deal for Colorado."

The campaign finance records from the Colorado Secretary of State's Office shows contributions totaling more than $3 million as of Oct. 12:

RELATED: Don't want to miss important dates leading up to the election? Try one of these phone backgrounds