Mayor Michael Hancock discussed the coronavirus' impact on Denver, homelessness and racism in his State of the City address. We sat down with him after. 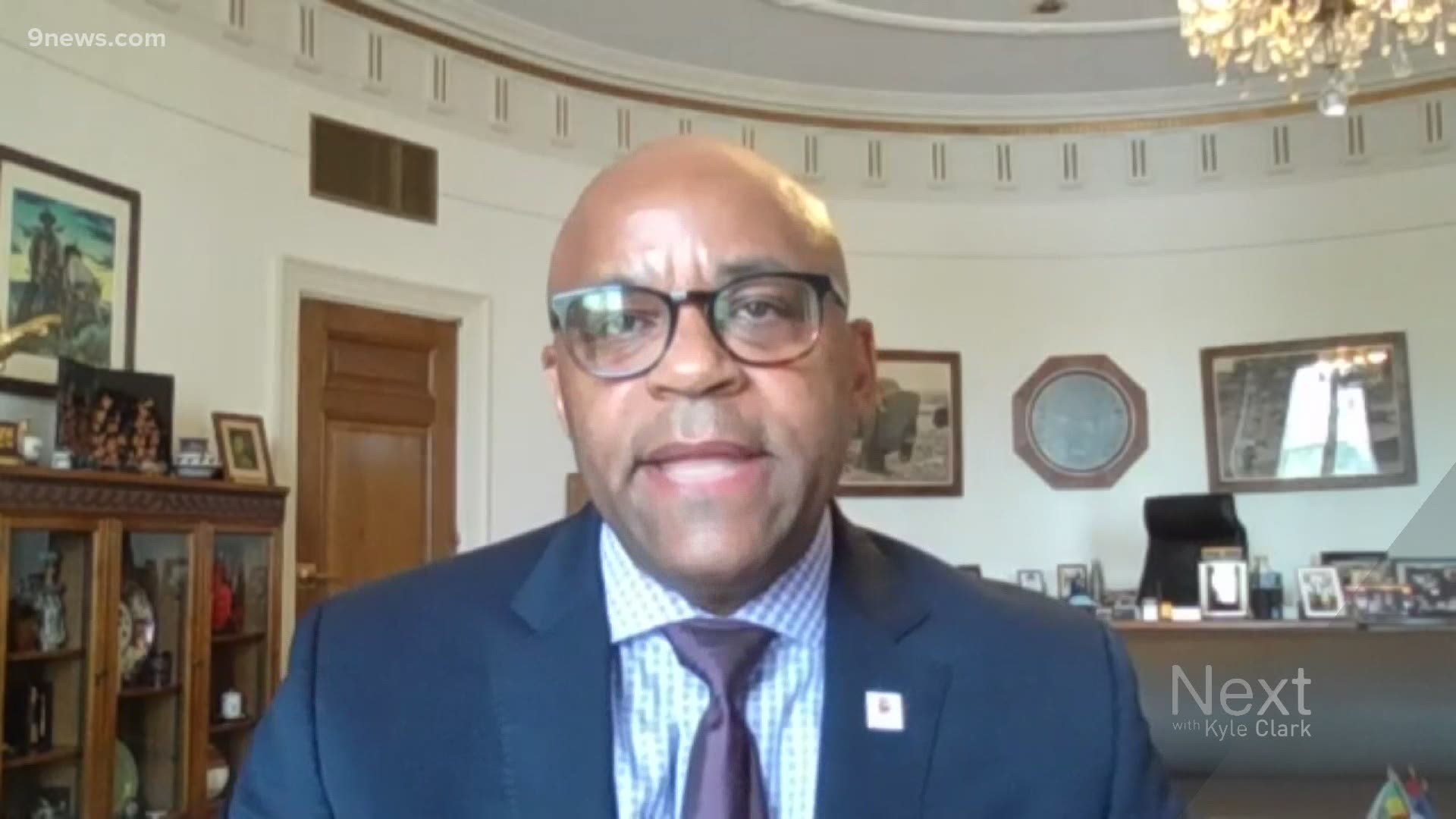 DENVER — Denver Mayor Michael Hancock delivered his State of the City address on Monday, when he encouraged support of a city sales tax increase to provide more services for those experiencing homelessness and also warned about $22 million in cuts.

While various projects in Denver will continue because of bonds, the city will furlough city employees again in 2021 because of the budget, Hancock told political reporter Marshall Zelinger in an interview following the address.

In the interview, they discussed the impact of the general impact of the budget shortfall, the return of professional sports and the fate of the free COVID-19 testing site at the Pepsi Center.

You can read some of the answers below.

Answers may have been edited for clarity or length. You can see the full interview here.

In your speech, you mentioned Denver’s $227 million budget shortfall in the State of the City, and it will mean hard cuts. What gets cut?

First of all, it’s always hard when we ask city employees to go on furlough without pay, because I know it hits employees differently proportionately depending on what they’re paid and what they do every day. So it’s a very, very difficult call to make.

But I think you’re going to see some things, you know – basic maintenance around public grounds. Like our parks, for example, may not be mowed as much. We may not empty the trash at the parks as much. Library hours being cut, recreation center hours being reduced, as well. A lot of the same things we had to do to get through the Great Recession, I think we’ll see. Our goal is to maintain essential services and try to get back some level of normalcy as quickly as possible.

You called racism a public health crisis? What’s the significance of that designation?

It’s how we approach it. Instead of just thinking about it in silos in terms of insulated incidents, we need to think about it as a system of challenges that continues to permeate through a lot of our interactions and industries, and sectors. The reality is is that fundamentally, we can trace it back to 450 years ago when slavery came and we really started the exercise and practice of racism and using it as a tool to disenfranchise, to depress a race of people. And we it permeating even today, and law enforcement really, unfortunately across this country, continue to allow those practices, and that’s why you have books like The Next Jim Crowe that kind of show and demonstrate to all of us how this virus of racism continues to penetrate even within law enforcement activities within the community, and in business, and so on and so forth. I said, we got to do it different. We got to approach it differently – not isolated incident, with just law enforcement, but as a virus that continues to impact our community. Let’s research it, let’s come up with the best development of training and strategies to combat it, and let’s also work toward reconciliation.

Also in your speech, you asked for support for Councilwoman Robin Kneich’s proposal to deliver funding for better shelters, expanded services and more housing to address homelessness. What are you asking for from Denver taxpayers?

Well, it's a .25% increase in our sales taxes. Let me just say this clearly. Whenever we talk about increasing taxes, it's a concern -- nothing we take lightly. This is a big deal, but we recognize today that we can't continue to do what we've always done and expect different results when it comes to dealing with people who are experiencing homelessness in the city of Denver. We need more resources. And we said last year when we defeated the repeal of our urban camping ban that we can do better. This is a step in that direction.

When and how do the encampments end?

Very soon. We are already working on a strategy to clean up these encampments. We recognize that they're unsafe, they're unsanitary, and we've got to move our individuals to a safer, better-managed situation. We're doing that. We have enough beds to accommodate the people who are in these encampments and we're going to try to move them, but we've got to do it in a safe, strategic manner.

The Pepsi Center COVID-19 testing site is due to run out of funding at the end of the week...

It's out of funding as of right now, but we continue to work with the state. I talked to the governor today. We're both very, very committed to finding a way to keep it going. We have our teams working around the clock. This was not easy to set up, and it's not going to be easy to manage across city and state functions, but they are working hard to make that happen.

Will it be open tomorrow if it's out of funding?

It'll be open tomorrow... My goal is for it to be open next week. We'll find a way to keep it going.

RELATED: Some waiting 10 or more days to get COVID-19 results back from Pepsi Center site

Assuming professional sports seasons continue, do you support a variance to have fans in the stands at Coors Field or at Mile High?

I would have to see every one of the plans, to be honest with you. I learned not to just say yes or no. We got to know how they keep everyone safe and what protocols will be put in place.

Would you go to a game?

I would. If I felt safe in the social distancing aspect of it, I would wear my mas, and I would go.

The reality is, the stadiums are so large that they can probably have a third or half of their fans there and keep people socially distant. I think that's the kind of thing you may see as an easy roll-out until there's a vaccine.

On the jail escape less than one week after appointing new sheriff:

Just before Hancock's address, his new Sheriff, Elias Diggins, was giving an update on a Detention Center inmate who escaped on Sunday, by providing false information to deputies. Video provided by the Denver Sheriff's Department showed him get released and walk right out the front door.

Hancock appointed Diggins as Sheriff last Monday. Six days into Diggins' job, his department was in the news for mistakenly releasing an inmate.

"It's not a good feeling. It's a concern for all of us that it was even allowed to happen. I know Sheriff Diggins, as he has alerted the entire community, that we are looking for this individual, we're going to do everything we can, turn over every rock to find him," said Hancock. "In the meantime, we're also going to make sure that we continue to dot every I and cross every T, to make sure we know who we're releasing. He went through extraordinary circumstances to conceal who he was. We got to be one step ahead of those who try to be more crafty while they're inside our detention center."